The Sandman: The Doll's House by Neil Gaiman

The second Sandman collection picks up from the last one, with the Sandman continuing the process of restoring the Dreaming to its proper state, and also introduces a whole slew of new characters and storylines that will continue to resonate within the series until its very end. 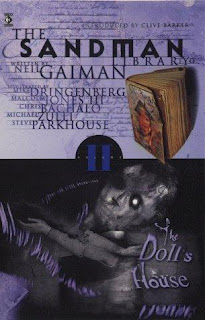 Rose Walker and her mother travel from the USA to the UK to mee an unknown benefactor who has paid for their trip. The benefactor turns out to be Unity Kincaid, a victim of the sleeping sickness that swept across the world between 1916 and 1989, whilst Morpheus was imprisoned by Burgess. Whilst she was sleeping, Unity was raped by an unknown assailant, and had a baby, who turns out to be Rose's mother. Rose and her mother are stunned by this revelation, but Rose also takes advantage of the financial largesse of her very wealthy grandmother to undertake a search for her brother Jed, who disappeared several years ago.

At the same time, Morpheus has detected the forming of a 'vortex', a dangerous focii of dream-energy that could disrupt the dreams of the entire human race and kill them. Before he can shut down the vortex, which takes the form of a person, he decides to use it as bait to lure out several inhabitants of the Dreaming who fled to the waking world during his imprisonment, such as the thoroughly amoral Brute and Glob, the personified dream-place Fiddler's Green and the Corinthian, created by Morpheus to be the 'ultimate nightmare'. This results in Rose and her family being placed in extreme jeopardy.

Several other stories are also wrapped around this one: we learn why the Sandman's former lover, Nada, was glimpsed in Hell in the opening volume. We learn that his younger brother/sister Desire is plotting something behind his back. We also meet arguably the Sandman's only true human friend, Hob Gadling, from whom the touch of Death was lifted in 1389, making him immortal. Once a century Hob and Dream meet at the same pub and compare notes on how their lives have unfolded over the past century. This story, Men of Good Fortune, is a stunning piece of work and one of the seminal chapters of The Sandman (alongside the likes of The Sound of Her Wings from the first collection and the forthcoming Midsummer Night's Dream, Three Septembers and a January, The Dream of a Thousand Cats and Ramadan). It also introduces Will Shakespeare, whose amazing writing skills are revealed to be the result of a pact made with Dream, in return for which Shakespeare agrees to pen two special plays for Dream. But more on them when they appear.

The Doll's House represents a quantum leap forward in Neil Gaiman's writing and storytelling abilities. So many storylines revisited in future stories are set up it's pretty breathtaking, from linking this version of the Sandman to the previous DC one (an ineffective, slightly bumbling human crime-fighter called Hector Hall) to the establishing of numerous characters we will meet again later (such as Lyta Hall) and the establishing of several new regular characters, such as Matthew, Death's new raven, and Fiddler's Green. It also features one of Gaiman's most effective moments of horror, with a convention for serial killers (inspired by the World Fantasy Conventions of the mid-1980s) giving rise to moments of both disgust and jet-black humour (panels on deconstructing the stereotypes of female serial killers or how to make money from your hobby). There's also some nice tributes to other comics: as well as the 1970s version of The Sandman we also get a pastiche of Winsor McCay's Little Nemo in Slumberland comic strips. As well as the obvious nod to Shakespeare we also get to meet Christopher Marlowe (who is dismissive of Shakespeare's first play, Henry VI, whilst his own masterwork Faustus is getting vast amounts of acclaim).

We also get some more clues as to what The Sandman is about. The legend of Nada shows that the Sandman has made some mistakes in his past and he needs to correct them, whilst Men of Good Fortune shows that the post-imprisonment Sandman is a slightly warmer person than before. A century spent alone has given him the chance to reflect on things and it's interesting seeing his cold, heartless side giving way more easily than before. The story ends with Dream confronting Desire and the immediate crisis solved...but Lyta Hall is living in mortal fear of what Dream told her (read and find out), which sets up events much later in the series.

The Sandman: The Doll's House (****½) is a radical improvement on the first Sandman collection, Preludes and Nocturnes, and gives the series a sense of purpose and direction. With the story Men of Good Fortune Gaiman's writing reaches a strong new level of maturity and intelligence, whilst Collectors may be among the most disturbing comics ever created.

Email ThisBlogThis!Share to TwitterShare to FacebookShare to Pinterest
Labels: neil gaiman, the doll's house, the sandman

I have not read any of Neil Gaiman's books, but with your interesting review I'm going out to purchase this one and its predecessor. Thanks!