The Sandman: Season of Mists by Neil Gaiman

The fourth Sandman collection finally follows up on the promise that Lucifer made to destroy Morpheus back in the opening collection. Destiny summons the Endless to a meeting, where we meet Delirium (who used to be Delight) for the first time and get some more information about the missing brother of the Endless. During the meeting Desire baits Dream about the treatment of his lover Nada, whom he banished to Hell for spurning him. Dream realises he/she is right, and resolves to travel to Hell and rescue his former lover, despite Lucifer's vow. 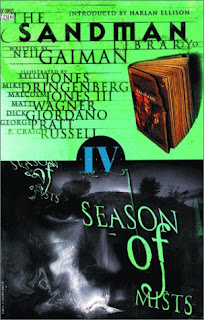 Season of Mists takes Dream on a journey into Hell and a confrontation with the Morningstar...but not the type of confrontation he was expecting. Dream ends up, slightly bemused, as the keeper of the key to Hell, and is soon being petitioned by gods and representatives from many pantheons (including the gods of Chaos and Order, and deities from the Egyptian, Norse and Japanese pantheons) anxious to get their hands on the finest plot of real estate in the multiverse, at the same time as he is also trying to find his missing love, and Death is attempting to repair the damage caused by countless legions of the dead suddenly being released back into the mortal world.

After the short story interlude of Dream Country, it's good to be back to a solid, long story arc. Although it's a reasonably long tale it's not the most dynamic story in the Sandman canon, and unusually most of it takes place in the Dreaming with only a few scenes set in the real world, and a longer chunk set in Hell. This allows us to see a bit more of the Dreaming and its inhabitants, but the meat of the story is seeing how the different pantheons interact together and who actually has the best claim on Hell.

As usual, Gaiman fills the story with neat little details and touches. The notion of there being a library in the Dreaming where all the books writers dreamed of writing but never got round to it is a fascinating one, and it's amusing to see books there such as Tolkien's The Lost Road (which was supposed to be a big story about his island kingdom of Numenor, but he abandoned it after a few pages). Elsewhere there are nods back to earlier stories: when Dream fears he may be destroyed in Hell, he decides to make time for a brief drink with his friend Hob Gadling, although they are not due to meet for another ninety-nine years. He also looks in on the newly-born son of Hector and Lyta Hall and gives him a name, Daniel, to Lyta's rage and horror. Elsewhere there's nice touches about the various gods, such as Chaos being personified as a young girl and Order as a carboard box, and Thor trying to impress some of the female deities present with his hammer, which gets bigger if you rub it (which is mythologically accurate)! Finally, we get a glimpse into the Sandman's collection of artefacts he has accumulated over the years, and see the skull of the Corinthian, a city trapped in a bottle and an old pocket watch, all of which are explored in future stories, in some cases years down the line.

As with previous collections, Gaiman interrupts the linear narrative of the story to give us a self-contained story in the middle of the collection which nevertheless comments on the action around it. A young boy left alone at boarding school for the holidays (after his father is among the hostages taken by Saddam Hussein in the build-up to the Gulf War) is suddenly joined by all those who died in the school over the previous century or so. It's a rather grim story, but ends on an interesting, optimistic note.

Season of Mists (****) isn't quite up there with the best of the Sandman collections. It is a tad overlong given its relative lack of actual incident, but for expanding our knowledge and understanding about Hell and the Dreaming, for introducing important new characters (particularly Daniel, Cluracan and Nuala) and for resolving the Nada storyline, it does a great job. The graphic novel is available from Titan in the UK and Vertigo in the USA, and forms the opening part of The Absolute Sandman, Volume II, available from Vertigo in the UK and USA.
Posted by Adam Whitehead at 12:40

Email ThisBlogThis!Share to TwitterShare to FacebookShare to Pinterest
Labels: neil gaiman, season of mists, the sandman