The Charnel Prince by Greg Keyes

Picking up where The Briar King left off, the second volume of The Kingdoms of Thorn and Bone ups the stakes and pace significantly. The Kingdom of Crotheny is in turmoil and the capital, Eslen, seethes with those who would take advantage of the crisis to snatch some power for themselves. A composer, Leoff, finds himself elevated to the court after an unexpected act of heroism and made a pawn in the struggle between the Queen Mother and her sworn rival. Meanwhile, Princess Anne remains on the run with a small band of companions, and their flight back to Crotheny from the distant south is fraught with peril, whilst Sir Neil is sent on a quest to find her. Aspar, the king's holter, finds himself recruited by the Church and charged to hunt down and destroy the monstrous Briar King, but within the forest he soon finds that not all is as it seems... 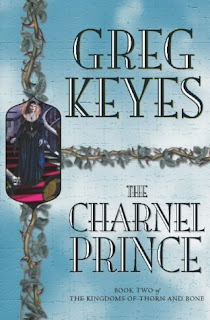 The Charnel Prince is a solid continuation of this intriguing series. It's similarly as fast-paced and readable as the first book, and new characters and new storylines unfold that are mostly a match for those that have come before. A few storylines from the first volume are even concluded. Keyes' writing is fluid and well-paced, and the author's own skills at fencing and knowledge of composing come through in the writing, providing a solid backdrop for the story.

There are a few issues. Almost every chapter finishes on a major cliffhanger, which is frustrating as it's often not until several chapters later that we get back to that storyline, meaning that at any one time almost the entire cast of characters is in some form of jeopardy, which gets a little wearying after a while. Also, there are notably fewer twists around this time than in the first book and the second volume is a little bit more predictable than the first. Nevertheless the story ends strongly and leaves the reader eager to tuck into the third book, The Blood Knight.

The Charnel Prince (****) is available from Tor in the UK and from Del Rey in the USA.
Posted by Adam Whitehead at 12:37

Email ThisBlogThis!Share to TwitterShare to FacebookShare to Pinterest
Labels: greg keyes, the charnel prince, the kingdoms of thorn and bone