The battle for Cybertron has ended with Optimus Prime hurling the Allspark, the key to his dying world's salvation, through a space bridge portal and into deep space. He pursues in the Autobot starship, the Ark. Back on Cybertron the last remnants of the Autobot Resistance mount what seem like increasingly futile attacks on Deception bases, with Megatron finally victorious in his goal to conquer the planet, only to find it on the brink of destruction. 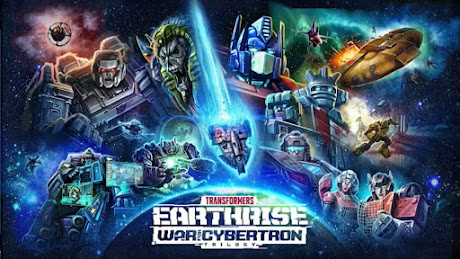 War for Cybertron is a new, cross-media instalment of the venerable Transformers franchise, consisting of a toyline and a three-part Netflix TV show, consisting of the sub-series Siege, Earthrise and Kingdom. One of the goals of this series has been to create a "greatest hits" of the Transformers franchise, packaged into an easy-to-digest single storyline spanning a modest eighteen episodes in total. Given the sheer expanse of the Transformers universe - more than 300 individual characters appeared over seven years in the first generation period alone with numerous takes on the basic premise stretching back almost forty years - this is theoretically a good way of making the property approachable for newcomers.
That said, I'm not sure War for Cybertron entirely works as a stepping-on point for newcomers in practice. This second season in particular seems obsessed with fanservice, so we get nods to the Creation Matrix, the Quintessons, Galvatron, Unicron and other elements that aren't actually the focus of the series, so probably shouldn't have been brought in at all. As a result, a streamlined and focused narrative, one of the key benefits of the first season, gets bogged down in mostly irrelevant trivia.
There's also the fact that not very much happens in the second season. Prime and his Autobots pursue the Allspark through space and find a space bridge portal that might help speed them to their destination. However, the portal is jammed by a space station that's gotten stuck in it. This leads to some very cool imagery but also fairly interminable scenes as the Autobots get bogged down fighting Scorponok (whose presence in the story is fairly random). A subplot revolving around mercenaries led by Doubledealer but in the employ of a deranged five-times-schizophrenic Quintesson is also potentially entertaining but under-serviced.
Instead we get more of what Siege handled awkwardly: lots of introspection. Optimus Prime second-guessing his decisions is a common trait of the character, but appearing indecisive and audibly doubting himself is not. The Prime of Siege is less of a confident military commander and more of an awkward politician who can't seem to make a single decision without having an existential crisis. This is a mistake writers have made before with the character, but never in such a high-profile instalment of the franchise. It's hard to see why anyone would follow this guy into battle when he can't seem to get up in the morning without pangs of self-doubt.
Much better-handled is War for Cybertron's best idea (so far), namely that Megatron began the war because of class struggle. The Decepticons arose from Cybertron's downtrodden worker underclass, who were tired of being exploited, under-paid and under-appreciated. Megatron, himself a low-class bruiser with unusual intelligence who came to fame and fortune in the fighting arena, helped lead them in a revolution against the Autobot intelligentsia and nobility. This idea - on the surface somewhat barmy (Megatron as a version of Lenin) - is actually rather interesting and explains some of the oddities of the Transformers backstory, like how the majority of the population rallied to his banner and why the Autobots are such a tiny minority. Earthrise expands on this in a sequence where Megatron visits a district due to be shut down so its power can be diverted elsewhere and encounters a band of true believers in the Decepticon cause as a just one against elitist tyranny. This leads to some brief character introspection for Megatron as he has to consider whether he has been corrupted by power. This story works well, especially as it is handled relatively concisely and Megatron emerges from it more confident and surer of his motivations (unlike Prime).
In six relatively short episodes the show covers a lot of ground but not much of it seems to propel the story forward in any meaningful way. In fact, a lot of it feels like filler designed to keep things in a holding pattern until we finally get to Earth, where the third and concluding season (due later in 2021) will take place.
Earthrise (***½) eschews the first season's focus and better (though imperfect) pacing to deliver a lot of side-quests and filler, but for the most part it is entertaining. A more thoughtful and meaningfully-motivated Megatron is the show's greatest success in characterisation, but a much more hesitant and tremulous Optimus Prime is its biggest weakness. Overall, the show is watchable, if a bit too obviously treading water. It is available to watch on Netflix now. The final season should follow later in 2021.
Posted by Adam Whitehead at 13:34