Stardate 1207.3: 11 May, 2256. The USS Shenzhou stumbles across an immense, ancient Klingon ship. The confrontation ends in violence and the outbreak of full-scale war between the United Federation of Planets and the Klingon Empire. Disgraced Starfleet officer Michael Burnham is forcibly recruited into the crew of the experimental USS Discovery, a cutting-edge research ship which may have found a weapon to use against the Klingons...if it doesn't destroy the ship first. 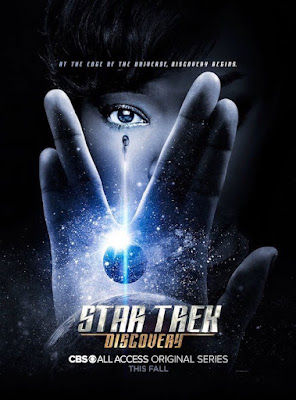 Being the first new Star Trek show in twelve years, and being the first in a third generation of shows for the franchise (after the original show and the Rick Berman/24th Century era), it's unsurprising that Discovery has come under a lot of scrutiny. The show has been dogged by controversy, first for airing in the United States on a paid streaming service without much other compelling content and then for egregiously redesigning the Klingons for no readily apparent reason. In the midst of delays to shooting and broadcast, showrunner Bryan Fuller left and there was a shake-up in the creative team behind the scenes.

Bearing in mind the chaos behind the scenes, Star Trek: Discovery's first season (or half-season) ends up being a relatively entertaining and fresh spin on the franchise. It's not the triumphant, high-quality return that fans were hoping for and the show is dogged by minor issues, but given the quality of most of the Trek first seasons (such as The Next Generation's terrible first few episodes and DS9's okay-but-slightly-dull opening hours), Discovery does not fare too badly at all.

First up, the show is visually spectacular. It has, hands down, the best sets of any Trek show to date and the production value and design of them is highly impressive (even if the rooms are a bit big for such a small ship, but okay). The quality of the CGI is remarkable, more than worthy of comparison with big-budget feature films, although it can be a bit murky and underlit. The new ship designs are a mix of the impressive and underwhelming, but they get the job done. This is the most expensive Star Trek show ever and every penny of that gets put on screen.

Cast-wise, there's little to complain about. Sonequa Martin-Green makes for an interesting protagonist, playing Michael Burnham - a human raised by Vulcans - with a good mix of emotional repression and intelligence, which sometimes results in her making bad decisions. A common complaint is that Burnham is not as immediately likeable as previous Trek protagonists, which may be true but she's certainly more human and more relateable. The season arc, which has Burnham disgraced by a bad call in the first episode and then learning from it, is reasonably successful (if obvious).

Jason Isaacs (Harry Potter, The Death of Stalin) plays Captain Lorca, a decidedly murky figure who is prepared to take risks and break regulations to get things done. He's not quite as far removed from previous Trek captains as some seem to think - under a similar wartime situation, Sisko broke the regulations on a fairly high number of occasions and Janeway threw the rulebook away after a while - but it's surprisingly to see a morally conflicted protagonist in the captain's chair from very early in the season. Lorca feels more like one of those slightly dodgy Star Trek admirals or captains who showed up from time to time (like Pressman or Leyton) for a single episode, we've just got him here for the whole season which allows for better character development. Isaacs is a charismatic and skilled actor who portrays Lorca as a damaged person who sometimes loses sight of the greater values and morals of Starfleet in his quest for victory.

Anthony Rapp plays Lt. Paul Stamets, a brilliant scientist with some interpersonal relationship issues who is frustrated with his role in the war. Rapp gives Stamets a certain nervous energy and arrogance which works really well and makes him sympathetic even when he's being insufferable. Doug Jones is also phenomenally good as Discovery's first officer, Saru, giving him a genuinely strange, alien quality that previous Star Trek protagonists have not quite managed. He's this show's take on Data or Spock and in that regard works very well.

The rest of the cast is very good, although they feel comparatively under-developed: a couple of recognisable actors are cast in apparently major roles just to get killed off for shock value, which feels a bit weird. Mary Wiseman gives Cadet Tilly a lot of energy and charisma, but after a couple of promising episodes she isn't given much to do (and an intriguing early suggestion that Tilly has special needs, which would be a first for the franchise, seems to have been dropped and forgotten about pretty quickly). Shazad Latif as a PTSD-suffering security officer is also very promising, if a late addition to the team. Less successful are the Klingon actors: they may be very good, but they are hamstrung by awkward prosthetics and having to speak almost all their lines in Klingon, which some are much better at than others. Of the recurring characters, Rainn Wilson also impresses as a younger version of classic Trek villain Harry Mudd.

In terms of writing and the quality of the episodes, Discovery is certainly never less than watchable, but in the early going struggles to find its tone and identity. The show has been criticised for being "dark and gritty", which is not really appropriate for the Star Trek franchise. It isn't really, certainly not compared to say the Battlestar Galactica reboot or even the darker moments of Deep Space Nine, and some episodes are downright goofy. We've had mysterious alien energy beings, characters being "weirdly affected" by space phenomena, hints at parallel universes and timelines, space battles resolved with a barrage of photon torpedoes and some really bizarre plot ideas (interdimensional tardigrades powering instantaneous FTL jumps?!) that would be at home in any previous incarnation of Star Trek. The show does have something of a darker tone - something that does feel incompatible with the more humourous moments - but it's certainly not gone full grimdark on us. The Federation is at war with the Klingons, as it was widely believed it was in this timeframe, resulting in the normal Starfleet mission of exploration and contact being suspended in favour of trying to achieve a military victory and a peace treaty, so clearly the show is not going to be as relaxed and cheery as perhaps other series could afford to be.

The result is a show that is giving us something we haven't seen before - a war story in the Star Trek universe from the perspective of a ship on the front line (DS9's Dominion War was mostly depicted from a space station far from the action). It's a bold choice and one that mostly works, with the interesting choice of giving us both sides of the struggle. Several episodes focus on the Klingon side of the conflict, particularly how an idealistic crusade was begun by a visionary martyr and continued by his underestimated subordinate before being supplanted by a grasping politician. It's a nice idea which would work a lot better if the new Klingon makeup allowed the actors to emote, and if, as mentioned before, they weren't being forced to speak all of their dialogue in Klingon (a nice idea that soon becomes irritating as it slows the action to a crawl). But it's certainly different.

Criticisms have been made of the show regarding its status as a prequel to the original series. Discovery ostensibly takes place in the original (or "Prime") timeline shared by all previous Star Trek shows (and which J.J. Abrams' movies have deviated from) but it's also a visual and aesthetic reboot, with new ship designs, the new and decidedly unsuccessful look for the Klingons and a blatantly higher level of technology than is strictly era-appropriate, complete with lots of holograms. However, clunky button interfaces and classic-ish designs for phasers, communicators and tricorders do at least nod at the right timeframe. As it stands, the show fits into existing canon a little awkwardly but not quite as badly as some commentators suggest. One clever writing moment even explains Sarek's fury with Spock in the original series a lot better and the musings on ethical behaviour, codes of conduct and the unfolding of a bloody war between the Federation and Klingons do feel like they're setting up the original series in a reasonably effective manner. There's still a lot of work to do here, but previews of later episodes do suggest that he show will continue to dovetail towards the original series in other aspects of design.

Star Trek: Discovery's first half-season (***½) gets off to a reasonable start, despite some clunky writing, a terrible new design for the Klingons (which needs to be amended stat) and some awkward continuity issues. But as the season continues, the show gains confidence and starts leaning on the canon and its excellent cast to deliver more effective and interesting stories. It's certainly not the franchise at its best, but these are comfortably the best opening nine episodes of any Star Trek series to date.

Star Trek: Discovery's first nine episodes are available to view now on CBS All Access in the United States and Netflix in most of the rest of the world. The show will return for six episodes in January 2018.
Posted by Adam Whitehead at 11:31

Fungus-based instant teleportation across the galaxy. What's next, a giant green space hand?