Christopher Tolkien resigns as head of the Tolkien Estate

In news which suddenly explains a lot of what's been going on in the last week or two, it's been confirmed that Christopher Tolkien, the third son and literary executor of J.R.R. Tolkien, has resigned his position as head of the Tolkien Estate at the age of 92. 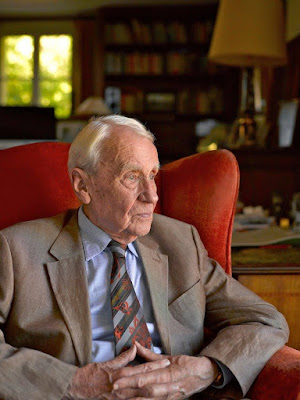 Christopher Tolkien has been the literary heir to his father's writings, particularly those set in Middle-earth. However, he has rejected substantial sums of money to continue his father's work and write new material in the setting. Instead, he has restricted himself to editing and presenting his father's unpublished work for public consumption. This has resulted in two further canonical (or mostly so) books in the Middle-earth legendarium: The Silmarillion (1977) and Unfinished Tales (1980). He has also edited and published The Children of Hurin (2007) and Beren and Luthien (2017), episodes from The Silmarillion that Tolkien fleshed out with more detail but had not completed before his death in 1973. Christopher Tolkien arranged for them to be published by combining multiple drafts and narratives into single stories.

Between 1983 and 1996 Christopher Tolkien also published The History of Middle-earth, a twelve-volume series which published every single early draft, fragment and writing of J.R.R. Tolkien's on the subject of Middle-earth and showed the development of the legendarium from the earliest concepts right through to ideas and material Tolkien was working on at the time of his death (including, even, a brief idea for a sequel to The Lord of the Rings which he soon abandoned).

Christopher Tolkien's position as head of the Tolkien Estate and Trust means that he has made all of the major business decisions related to the properties of J.R.R. Tolkien. J.R.R. Tolkien sold the film, TV and merchandising rights to The Hobbit and The Lord of the Rings in 1969 (from which New Line and Warner Brothers got the rights to make the Peter Jackson movies), but Christopher has refused to sell similar rights to the other Middle-earth books despite some very generous offers from studios. Other senior members of the Tolkien trust include his younger sister Priscilla, his nephew Michael and his second son Adam, along with Christopher's second wife, Baillie. Christopher Tolkien famously disapproved of the Peter Jackson movies and even ostracised his eldest son Simon and his nephew Royd when they approved of the films and even accepted cameo roles during filming (Simon has since reconciled with his father and is now formally part of the Tolkien Estate).

Christopher resigned from the Tolkien Estate on 31 August 2017. The proposed Amazon television series has been in the offing for at least a couple of months, so Christopher's retirement seems to have coincided with a desire by the Estate to be more open to the idea of adaptations: Priscilla Tolkien approved of the 1978 Ralph Bakshi animated movie and even provided some advice to the film-maker, whilst the other members of the Estate seem to have wanted to take greater oversight to, amongst other things, avoid the legal problems that cropped up several times between 2004 (when they began legal action to get the film finances properly audited) and this year, when they concluded a legal action begun over the use of Tolkien characters in slot and gambling machines, rights which were not included in the original 1969 deal.

The question now is if the Holy Grail - the rights to The Silmarillion and Unfinished Tales - will be made available. They haven't so far and it might be disrespectful to Christopher Tolkien to discuss this whilst he remains alive (due to his staunch opposition in the past), but it might be now that doors that once seemed firmly locked and closed are now, at least, slightly ajar.

One thing is certain: that all fans of fantasy literature owe Christopher Tolkien a tremendous debt and thanks for ensuring his father's work reached appreciative readers and in a way that was respectful and of the highest integrity.
Posted by Adam Whitehead at 17:07

A good example of why it's sometimes best to want, not "everybody doing the right thing", but "lots of different voices". Most Tolkien fans probably have a mixed opinion of CT, at best - he's seemingly even moe hidebound and conservative than his father - and he's made some frustrating decisions (like the glacial speed of release, or non-release, of some of JRRT's linguistic work). Indeed, I've rarely agreed with the man. But at the same time, I think we've all benefited from the existence of CT as a counterbalance to the rampant commercialism that otherwise would have devalued the Tolkien brand long ago. And maybe he had to be a bit too extreme in that direction, to give him enough backbone to resist the powerful forces in the other direction.

I do hope that the Estate loosen the reins a little bit. But I also hope that some part of the spirit of CT remains in their decision-making...

[A Silmarillion series would be a far more exciting prospect, albeit also a far-more-likely-to-fail-horribly prospect, than a TV remake of the LOTR films*]


[*I've always though LOTR would do better as a limited-length TV show than as a film, and I think there is scope to take a darker, truer-to-the-books approach that PJ's comfort-food version took. I'd certainly love to see an appropriately cold and damp rendition of the barrow wights. Unfortunately, given the commercial imperatives, and how recent the films were, I don't have much hope that they will actually follow that or any other artistically valid approach, rather than just churning out a slight more 'modern' version of the films and watching the gold coins pour in.]

I just hope it doesn't become over exploited, where we have like a nine book prequel series written by Kevin J. Anderson or something.

Explains the Amazon series then. The vultures didn't even wait for the body to get cold.