The news broke last night that Amazon are in talks with Warner Brothers about making a big-budget TV series based on J.R.R. Tolkien's The Lord of the Rings, despite the perception that Peter Jackson's movie trilogy is too recent and a remake at this time is unnecessary. What's been less reported is how this will impact on Sony's TV version of Robert Jordan's Wheel of Time novels, which were widely expected would end up at Amazon. 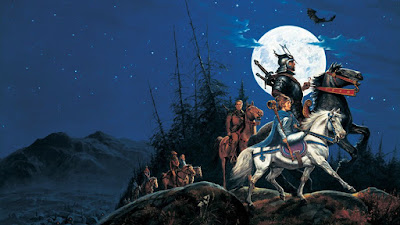 To rewind, in April 2017 it was confirmed that Sony TV had optioned the rights to The Wheel of Time in a complex deal involving the Robert Jordan Estate (aka the Bandersnatch Group) and Red Eagle Entertainment. A few months earlier it was heavily rumoured that Amazon were seriously considering making the series, as Amazon chief executive Jeff Bezos is a huge fan of SF and fantasy in general (he had a cameo in the latest Star Trek movie, Beyond) and - apparently - Wheel of Time is one of his favourite book series. Amazon also recently reorganised their TV production division, cancelling several smaller shows and Bezos mandating the acquisition of a big-budget SFF project to compete with Game of Thrones on HBO. Wheel of Time was a no-brainer for this treatment.

However, seven months after Sony confirmed it had optioned the book rights, no production partner has been confirmed. Although not completely unusual - many years between optioning a property and greenlighting it is not unheard of - it was expected that studios would move quickly to snatch up the rights to a property that could comfortably go toe-to-toe with Game of Thrones in terms of epic scenes, number of characters and scale. Now it appears we know why there's been radio silence: Warner Brothers have been (quietly) shopping around their new Lord of the Rings TV project around at the same time. Although studios appear to be dubious about making a new LotR screen project so soon after Jackson's film series, they are also weighing carefully the benefits of picking up a much more well-known franchise which would get a lot of viewers from the off.

This leaves The Wheel of Time TV project in an awkward place. WoT was - comfortably - the biggest and most successful epic fantasy series not currently under an option, so it had a degree of brand value in the marketplace. With Middle-earth in play, that is no longer the case and the problems of adapting Wheel - its immense visual effects requirements, high budget and the challenges of adapting 14 books totalling 4 million words (eight times the length of Lord of the Rings) in a reasonable timeframe - may have come into greater focus.

It's worth looking now at the channels and broadcasters who may be in the running to adapt WoT and see how likely they are to follow through:

Amazon are in deep discussion with Warner Brothers over the LotR TV show and Jeff Bezos is a noted fan of the books. He is personally involved in negotiations. They are clearly taking this approach very seriously. However, they have not committed yet. WB are asking for an astonishing amount of money up-front (totalling a third of a billion dollars) and are not bringing anything new to the table. Only The Lord of the Rings is on offer, with perhaps a possibility of The Hobbit as well, but none of Tolkien's other Middle-earth books are included in the deal, so no new material can be brought to the screen that hasn't been adapted previously. Although the deal is tempting, Amazon will likely have to weight up the benefits of the brand name and value versus the likely criticisms they will get for not going for a more original project.

If Amazon passes on LotR I could see them picking up WoT. This is a new project (for the screen) but also one that will last easily six or seven seasons (at least) and they can cross-market the show with the books and other merchandise. Amazon also appear to be the only company in the running who can stump up the significant budget that Wheel of Time will require. However, I strongly suspect that they will be more inclined to go with LotR if they can make the finances work.

Sony and AMC have an excellent prior relationship from Breaking Bad and I suspect AMC will be seriously considering the advantages of adapting Wheel of Time to add to their enviable SFF programming, which currently includes The Walking Dead and Preacher. However, AMC's preferred business model has them making shows for a very, very low budget and just making them look impressive, allowing them to maximise profits. They have already faced heavy criticism for the shoestring budget that The Walking Dead is made under, despite the show's massive global success. It is unlikely that AMC would give The Wheel of Time the $6-7 million per episode budget it will need as a minimal starting point. Still, AMC may still be in the picture if they can be persuaded to loosen the pursestrings.

Starz are also enjoying a spectacular surge in genre programming, with both Outlander and American Gods doing very well. Wheel of Time would be an enviable addition to their lineup, and Starz certainly are prepared to spend more money than AMC. They may be tempted to take another look at Wheel of Time if Amazon are now out of the picture.

FX have been quietly building a slate of excellent shows recently, including Fargo, Legion, American Horror Story, Archer, The Americans and Atlanta. A high-budget, high-profile fantasy show is precisely what they are missing, and they also aired Red Eagle's proof-of-concept Wheel of Time pilot thing a couple of years ago, for which they received a lot of interest from viewers.

I'd previously dismissed CBS as being a likely home for the show, since their budgets for network shows are pretty small. Since then, however, they've launched the CBS All Access platform and achieved significant success with Star Trek: Discovery, which has a budget of $7 million per episode. If CBS wish to maintain momentum with the All Access project they will need another high-profile killer app, and Wheel of Time could well be it.

SyFy has achieved some success with the TV show The Expanse, but has recently cancelled several shows and their bandwidth for making lots of big-budget shows at once is limited. I consider SyFy to have only an outside shot at the moment.

Netflix would seem like a very probability on the list. They have developed a portfolio of shows, but they don't yet have an epic fantasy show to go toe-to-toe with GoT. It would seem likely that they would be interested. However, Netflix have gotten into significant debt to deliver their current slate of of shows and have axed expensive series such as Sense8 and House of Cards (it was widely reported that the sixth season would be the final one even before they axed Kevin Spacey) in favour of much cheaper programming, such as GLOW and American Vandal. Although Netflix's overall programming budget is increasing, the amount they are willing to pay per-show is definitely decreasing (although they have noted this may increase again, and certainly Stranger Things is not a cheap show to make). Wheel of Time would likely remain of interest to them, however, and if they decide a new high-profile show is needed they would likely stump up more money.

ETA: Netflix are developing a TV series based on The Witcher video games and books by Andrzej Sapkowksi, which likely would reduce their interest in another top-tier fantasy show.

The Amazon/LotR discussions are troubling to Wheel of Time fans as they would seem to shut down the most logical pairing of network and project. However, other networks remain in play. I would say at the moment that Starz, AMC and FX may now all be more likelier destinations for the project, with CBS All Access and Netflix as outsider players. If Amazon choose not to proceed with LotR, I suspect they would also take another look at Wheel of Time.

More concerning will be oversaturation of the market: if, by 2021 or thereabouts, we have a Kingkiller Chronicle TV show, a GoTspin-off (or two), a Lord of the Rings TV series and additional seasons of Shannara and American Gods all on air at the same time, it might be felt that further fantasy series would be redundant. As usual, time will tell.
Posted by Adam Whitehead at 19:25

Email ThisBlogThis!Share to TwitterShare to FacebookShare to Pinterest
Labels: amazon tv, amc, cbs, fx, hbo, showtime, starz, syfy, the lord of the rings, the wheel of television, the wheel of time

I'd love to see Mike Carey's Felix Castor novels adapted. They're excellent noir detective stories that could work for 'normal' viewers and would, given the lack of fx needed, presumably be relatively cheap to film. Great individual books and a terrific overall arc. The slight horror tone would be a nice change of pace for a detective series too.

I think studios are barking up the wrong tree with a LotR TV project. It's never going to have those water cooler discussion moments which contributed to GOT buzz when most potential viewers are already going to know the major beats of the story. I'm not the biggest fan of Wheel of Time as a written series but an adaption simplifying some elements could work wonders.