HOMEWORLD: DESERTS OF KHARAK gets a big discount and update 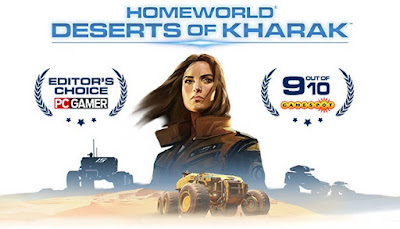 Deserts of Kharak is a prequel to the classic Homeworld series of real-time strategy games (Homeworld, Homeworld: Cataclysm - recently renamed Emergence due to copyright issues, and Homeworld 2). Although made by a new company, Blackbird Interactive was founded by ex-developers from Relic Entertainment and includes many veterans who worked on the original games.

The new update fixes some rare but annoying bugs in the original game and adds a "tactical pause" feature, allowing orders to be given to units whilst the game is paused. This feature was present in the original Homeworld and its sequels but was missing from Deserts of Kharak due to time pressures during development.

Deserts of Kharak has also been heavily discounted to £8.99 during the Steam sale. It is an absolute no-brainer for that price. Homeworld Remastered, the spruced-up and re-released version of Homeworld and Homeworld 2 - has also been discounted for the sale and if buy both games together you get a further saving.

Blackbird and publishers Gearbox have also said that the Homeworld franchise will continue - hopefully with a full Homeworld 3 set in space to pick up on the slightly odd ending to Homeworld 2 - if sales of Deserts of Kharak and Homeworld Remastered are strong enough, so if you were thinking of picking up the games but hadn't gotten round to them yet, now is a good time for it.
Posted by Adam Whitehead at 13:56