Idea: why not adapt Guy Gavriel Kay's novels for the screen?

Fantasy is big right now. We've heard lots of news about Amazon's new Lord of the Rings TV project, Game of Thrones is wrapping up but will have spin-offs, Netflix is producing a Witcher TV show, Showtime are doing a Name of the Wind prequel show, Starz have American Gods and even Spike TV is still trying to make Shannara happen. There are signs that the fantasy bubble may be cresting - Sony's Wheel of Time project still hasn't found a home despite it being a slam dunk - but I think there's still room for a few different projects out there. 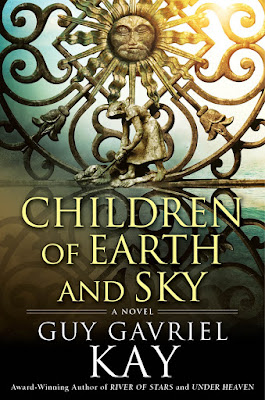 One author whose work has not hit the screens yet is Guy Gavriel Kay. It's easy to see why: Kay's novels tend to be too long to make for comfortable two-hour movies, but too short and too self-contained for long-running TV shows that can be exploited for years on end. His books are also based closely on real history with (relatively) little traditional magic, which used to make them a tough sell. However, it could be a point in its favour with some of the other upcoming projects having a lot more magic and the need for high budgets, whilst Kay's work could be adapted a bit more easily and could tap into the Game of Thrones fanbase looking for more work that emphasises politics and characters over flashy effects.

One interesting solution would be to do Kay's novels as a Fargo-style anthology series, where each season has its own storyline, characters and actors but take place in the same universe, with events earlier in the setting informing events set centuries later. It would be an unorthodox approach, but could be interesting.

I'd see this series unfolding as follows, with each season corresponding to a novel (or series) with the setting and time period that roughly influenced the book following:

It might also be possible to incorporate A Song for Arbonne, which takes place in a different world but is heavily influenced by the Albigensian Crusade in 12th Century France, into this scheme.

Tigana, although influenced by Renaissance Italy, features a very different world background with much more overt magic. It would probably be better served by a separate movie adaptation. The Fionavar Tapestry trilogy and its stand-alone sequel, Ysabel, could form another, separate TV series.

To date, the only interest in Kay's work has been from director Edward Zwick (Glory, Legends of the Fall, The Last Samurai, Blood Diamond), who held the rights to The Lions of Al-Rassan for a while. Hopefully someone will pick up the rights to Kay's work and bring it to a wider audience. One of the finest living fantasists, his work deserves to be better-known.
Posted by Adam Whitehead at 21:35

Email ThisBlogThis!Share to TwitterShare to FacebookShare to Pinterest
Labels: fionavar tapestry, guy gavriel kay, river of stars, the children of earth and sky, the last light of the sun, the lions of al-rassan, the sarantine mosaic, tigana, under heaven, ysabel

For me, Kay's work is what it is because of the introspection and the prose. The plots are a distant third; his narratives & their supporting structures don't always land well (I'm looking at you TLLotS). Seems like a lot of that would be lost in the translation to film.

Still, I guess, if it's bad I could ignore it and if it's good I could enjoy it.

I think it will be very hard. Most of Guy Gavriel Kay's work are based on non-Western cultures which may be a problem as the studios would need to take a chance Western viewers would be interested in such a fantasy setting. I think a better bet would be AJ Smith's 'The Long War'. The series is nowhere near finished but that didn't stop Game of Thrones.
BTW Adam, do you take book review request?

Bakker revealed post-TUC release that Amazon apparently had optioned the rights to PON, even, Sep '16 - though Kay is also a great choice.

They dropped the option (is that the right wording?) shortly before announcing the SF Snowcrash, Ringworld, and Lazarus purchases.

My thought is that they went all SF in those purchases because the negotiations for LOTR were suddenly possible for them.

Sad though - there is some other stuff to adapt (though, thankfully, Amazon is apparently already alright for original content).

I would love to watch such a serie. Ysabel would also be great for a stand-alone movie.

This is a clever idea. I personally would love to see an adaption of "Under Heaven" or "River of Stars" as a TV series like Netlfix's Marco Polo. However, that being said, the success of Game of Thrones and HBO's Rome would probably lend itself to an adaption (if a loose one) of the Sarantine Mosaic as a television series. It could be stretched out to a proper serial length (the appropriate six seasons and a movie) with a good cast of characters who could be uplifted to fit larger roles.

The lack of enormous battle scenes, dragons, the tight plotting, political nature, and less violence would make it far less costly than Game of Thrones, but still open to epic scope should the show ever desire it.