A Reddit user has posted three GIFs which seem to be from Netflix's upcoming TV series Altered Carbon, based on the first (of three) Takeshi Kovacs novel by British SF author Richard K. Morgan.

The images were posted by a user called "Last Envoy", possibly a reference to the titular character of Takeshi Kovacs, an "Envoy" who swaps bodies to carry out missions. They were accompanied by a time and location: 2348 A.D. and Bay City. The date backs up the information that the date of the series has been moved up by about a hundred years (the novel is set in the 25th Century), whilst Bay City is the name of the futuristic city in the book.

The "Skin Jobs Dive Bar" sounds like it could be a homage to Blade Runner. The noodle bar shot above also shows a police car and a handcuffed suspect.

Above is a "Smoks n Vapr" kiosk, which is appropriately convincing.

If these pictures are legit - and I don't believe there's any other epic cyberpunk TV shows or movies filming so I can't see what else they are from - then it looks like Netflix have spent their money well on the series.

Altered Carbon is due to air on Netflix in 2018. The producer said a few months ago that they were targeting a February release date, so this could be with us sooner than expected. 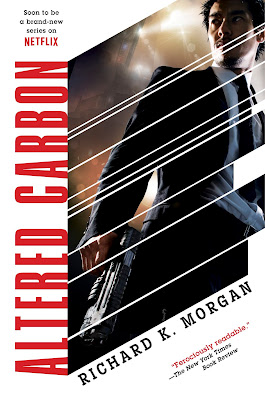 ETA: Here's the cover for the reissue of Altered Carbon, featuring - I believe - Leonardo Nam as the "original" Kovacs before he's resleeved. It's an interesting choice as Kovacs spends most of the novel in a Caucasian body (played by Joel Kinnaman) but okay.

ETA2: Richard Morgan has retweeted the story on io9, making it further likely this is legit.
Posted by Adam Whitehead at 20:30