AMC to air Dan Simmons' THE TERROR in Spring 2018

AMC's drama series The Terror, based on the Dan Simmons novel, is provisionally scheduled to air in April 2018. It will air on AMC in the United States and on Amazon in most of the rest of the world. 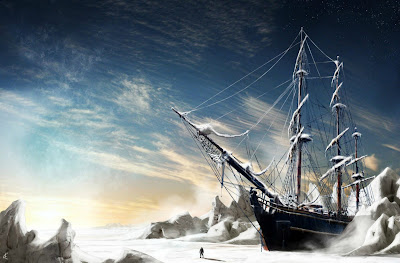 AMC are working on The Terror as an anthology format, similar to Fargo or American Horror Story. The first season will adapt Simmons' novel across 10 episodes; later seasons will either be original stories or adaptations of other books with a horror or supernatural twist. The first season has been written by David Kajganich

The first season will star Jared Harris as Francis Crozier, Tobias Menzies (Outlander, Game of Thrones) as James Fitzjames and Ciaran Hinds as John Franklin. The story follows the ill-fated Franklin Expedition, an attempt to find the Northwest Passage around Canada using two ships, HMS Erebus and HMS Terror. In real life, the two ships were trapped by ice and the crew are believed to have perished from starvation and exposure; Simmons' novel provides an alternate, supernatural explanation.
Posted by Adam Whitehead at 01:46

I've seen the book on the shelf at the public library and I've been tempted to read it, but the size of it has always put me a bit off. Might have to give a try next year.

Jason, it's fantastic. Dive in.