The Twelve Colonies of Kobol have constructed robotic servitors, the Cylons, to work as servants, soldiers...and slaves. The Cylons have rebelled, constructed a significant fleet and launched a series of attacks against the divided Colonies. The Colonial Fleet has been constructed to meet the threat, but they continue to bicker amongst themselves. It falls to the officers of the Fleet to lead the defence of the Twelve Colonies against a remorseless and relentless foe. 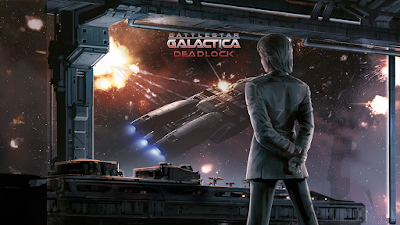 The rebooted Battlestar Galactica TV series ran for four seasons, a mini-series and two TV movies between 2003 and 2009. A remake of a cheesy late 1970s show, it featured (for the first two-and-a-bit seasons anyway) outstanding acting, superb and nuanced writing and some fantastic, spectacular space battles. It's surprising that we haven't seen a video game based on the series before, given its gritty complexity and the fact that the mythos are rich in different possibilities for gameplay, not to mention there's a very well-received board game based on the series already. The only previous official game for the setting was a low-key Facebook MMO.

It's therefore a bit random to see an official video game show up eight years after the TV show ended, although the fact it's from a tiny Australian studio and a small British publisher with limited budgets may explain that. Normally you wouldn't be expecting much from a game developed in apparently a small period of time (it was announced less than a year ago), on clearly a very tight budget, from niche companies. It's thus a pleasure to say that Battlestar Galactica: Deadlock is excellent, a hybrid of XCOM and Homeworld with a great storyline and lots of excellent adherence to the established lore whilst bringing in new ideas. 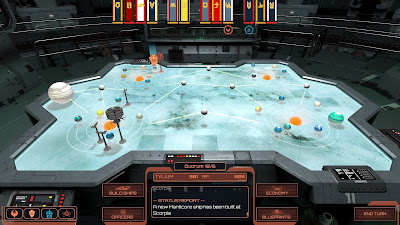 Deadlock is a two-tier game with a grand strategic layer and a tactical combat mode. The strategy layer shows a map of the Twelve Colonies on which you can build new ships, assemble new fleets, research new ships and weapons and make sure you're keeping the Colonies happy (leave a Colony under attack for too long and they'll withdraw from the Articles of Colonisation, along with their funding, a bit like XCOM). When one of your fleets meets a Cylon force, the game shifts to a Homeworld-style 3D battle map. You move your ships, launch fighters, select what weapons to use and can distribute power on each ship, boosting weapons power or hardening your computer systems to stop the Cylons hacking them. You can also recruit Colonial officers and level them up, which grants you special abilities in battle (such as being able to better resist Cylon infiltration squads if you give your commander the Marine Tactics specialisation) and allows you to bring more ships to an engagement.

The space battles are fought using the WEGO system, where both sides give orders and then the orders unfold simultaneously. This means you not only have to choose what to do, you have to take into account what the enemy may do on their side and anticipate accordingly. Each ship on each side has different capabilities, armour, speed and defences and as the campaign continues you have to learn the best way of using your ships and their abilities. Early battles, fought with the speedy, missile-laden but lightly-armoured Manticore-class gunboats and the more formidable Adamant-class frigates, tend to be fast and furious. Later battles, fought with Jupiter-class battlestars (like the Galactica) against Cylon basestars, are slower, more strategic and have many more options, with you having to decide to close to close range to use your railguns or stand off at long range and exchange missile barrages, timing when to use a flak barrage to take down an enemy missile volley whilst not blowing up your own ordinance or fighters by accident.


Slightly disappointingly, there isn't an open, Total War-style campaign where you can go from a lowly starting fleet to outright victory at your own pace; the game only covers the first few months of the Cylon War (out of twelve years), so ends with a major strategic victory, not the outright defeat of the enemy. Instead the game has a series of important "story" missions, which unlock new units and technology. You can choose to delay these missions to take on optional side-battles and build up more resources but the war doesn't move on until you do the campaign missions. Rushing these missions is a bad idea (particularly in the early game, where you want to start building up multiple fleets as early as possible) since you'll get overwhelmed quickly, so there's a strong judgement call to be made in when to trigger the next story mission and ramp up the difficulty and when to hold back to stockpile more tylium ore and requisition points for later developments. This is more like XCOM and works pretty well, but does reduce the scope for replayability.


The game's storyline is excellent, matching what we know of the lore whilst also introducing new elements. The presentation is slick - the graphical interface is very true to the TV show, the strategy map uses a big table and models just like the battle planning on the TV show and the Bear McCreary-ish music is outstanding - but there are moments when the lack of budget shines through. The voice acting is variable and the dialogue can be a little hammy. The late-game introduction of a Cylon character also feels a bit random, although it does change things up when battles are threatening to get a bit repetitive. 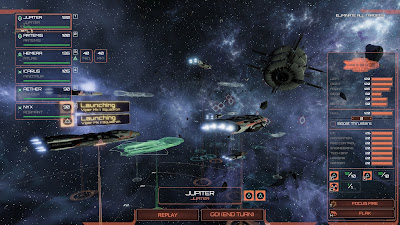 There are a few other niggles. Having to manually launch each Viper squadron from each ship can be a bit mind-numbing, especially when you get to the late game when you might have eight or nine squadrons in battle. A command to order all of your fighters around as one unit would be welcome (something Black Lab Games are looking at for a future patch). There's also occasional difficulty spikes which the game doesn't do a very good job of explaining or advising on how to overcome them. I kept getting annihilated when the missile-spamming basestars showed up until I realised that the flak cannons on battlestars can shoot down missiles as well as Cylon Raiders. It also feels like targeting and firing missiles and selecting which ship to focus fire on all involve at least one or two more mouse clicks than should be really necessary. As a turn-based game, none of these are critical issues and all commands in the game have keyboard shortcuts which make things a lot smoother.

Ultimately, Deadlock is both a great strategy game and a great BSG game, with lots of authentic flavour. Far superior to last year's Warhammer 40,000 space game (Battlefleet Gothic: Armada), Deadlock may in fact be the finest space tactics game since Homeworld 2's release fourteen years ago.

Battlestar Galactica: Deadlock (****) is that most welcome of games, a title that arrived with little fanfare and turns out to be excellent. The tactics are fiendish and compelling, the strategic layer adds some extra freedom to the game, the presentation is first-rate and the story is well-done. Some questionable voice acting and a few UI niggles do make the game slightly more labourious to play than it should be, but so far the developers have done a good job of patching out issues based on feedback so these may improve. The game ends with ten years of the war left to fight, and I would more than welcome an expansion or sequel further exploring this time period.

Battlestar Galactica: Deadlock is available on PC now via Steam. Versions for the PlayStation 4 and X-Box One should follow in the next few weeks.
Posted by Adam Whitehead at 00:50