LORD OF THE RINGS prequel TV show greenlit by Amazon

Further to the story from last week, Amazon TV have formally greenlit the Lord of the Rings TV series being shopped around by Amazon. Expanding on the more confusing parts of the deal, the new TV series will not, as previously reported be a remake of Peter Jackson's film trilogy. Instead it will focus on events that took place before the novel and movie series. New Line, the subsidiary of Warner Brothers which produced the original movie trilogy, will be involved in the production of the new series. 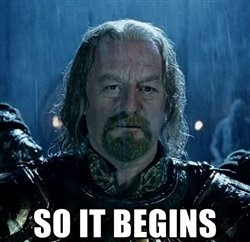 Amazon have given a "multi-season" commitment to the show, which is likely to displace Game of Thrones as the most expensive ongoing TV series ever made. At the moment it is unclear if the new show will take place in the same canon and continuity as the Peter Jackson movies (and thus use the same production design and perhaps actors if there is some cross-over), but at the moment it appears that the creative talents behind the movies (Jackson and co-writers Philippa Boyens and Fran Walsh) will not be involved in this new project at all.

Most surprising is the confirmation that the Tolkien Estate and Trust will be formally involved in the new project, alongside HarperCollins (the Tolkien Estate's preferred publishing partner for the  books). According to their statement, "the team at Amazon Studios have exceptional ideas to bring to the screen previously unexplored stories based on J.R.R. Tolkien’s original writings." This suggests that the series will drawn on events that took place between The Hobbit and The Lord of the Rings and are only inferred in the book and Tolkien's other writings. This new deal so far does not include access to any of Tolkien's other Middle-earth books, such as The Silmarillion and Unfinished Tales, but the Estate seems happy for Amazon to create original material based on the existing texts (which, if anything, is even more remarkable).

This is not unprecedented: at one point Peter Jackson and Guillermo Del Toro were planning a "bridging movie" set between a two-movie version of The Hobbit and Lord of the Rings, but these plans collapsed after Warner Brothers insisted on three full movies derived solely from The Hobbit (an ill-advised decision that precipitated Del Toro's departure from the movie trilogy and lukewarm reviews for what Jackson eventually produced). However, Jackson and Del Toro did spend some months developing that idea and it is possible that this series will draw on the same ideas and inspiration.

It'll likely be 2-3 years before we see anything on screen, but as of now Middle-earth is headed back to our screens, backed up by the resources of what could be the biggest TV company on the planet. It'll be interesting to see what they come up with.
Posted by Adam Whitehead at 18:53

I have sincerely mixed feelings about this. With the "Shadow of Mordor" games having played fast and loose with the lore of Middle Earth while trying to stay within that lore I am leery of attempts to do the same in a TV series.