Earth now knows of the existence of alien life and has been "inducted" into the Galactic Federation. Rick Sanchez is a prisoner of the Federation, his mind constantly being probed for information. Needless to say, it isn't long before Rick has escaped, reunited with his family and once again begins a new series of adventures...that is, if his own self-loathing doesn't destroy him and everyone around him in the process. 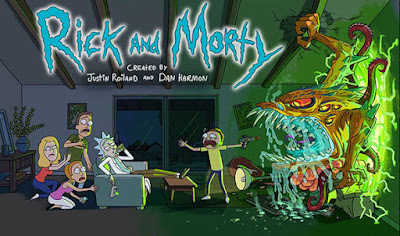 For its first two seasons, Rick and Morty was a cult show with a solid but small fanbase. In the two years since Season 2 aired, however, the show's fame has exploded. DVD, Blu-Ray and Netflix have brought the show to a more widespread, global audience, Ricky and Morty T-shirts are now everywhere and memes from the show are widespread.

As the first season to air in the full view of a global audience, this third go-around for Rick and his grandson Morty starts off feeling a bit off, like Dan Harmon and Justin Roiland are a bit blinded by the glare of worldwide publicity. Where jokes and ideas in the first two seasons came naturally, the humour in the third season feels a little forced, at least to start with, and going for a Mad Max: Fury Road spoof in the second episode feels a bit lazy (and rather late). Once the show gets a couple of episodes under its belt, however, things relax and we're back into Rick and Morty as we know it: an escalating series of crazy intergalactic adventures rooted in the characters' mundane home life.

The home life side of things is somewhat reduced this year, though. Jerry and Beth have separated (and aside, from a couple of key episodes, Jerry sits out a large chunk of the season) and what focus there is on Earthside adventures instead delves deeply into Rick's psyche. One of the more interesting twists of the show is that Rick is often simultaneously the protagonist and antagonist (and sometimes the villain, but not really the hero) of the series, with this season showing his uglier, nastier side in even greater detail then we've seen it before. The show seems to want to hammer home the idea that Rick is not a nice or mentally well-adjusted person, which is a reasonable move as it adds character depth, but sometimes the show feels like it's going overboard with it (especially since, almost invariably, Rick eventually comes good before the end of the episode).

This dark journey into Rick's soul is effective, if a bit overdone, but the season is at its best when it relaxes a little and goes bananas. The "Pickle Riiiick!" episode successfully mixes the two approaches, and the season finale works as a knockabout adventure. The best episode of the season, in fact, is the seventh, where "our" Rick and Morty sit out the episode in favour of a storyline set entirely on the Citadel, where Ricks and Mortys from across the multiverse live together. This clever and inventive episode sets up what should have been a long-term plot developing over the season, although this was sabotaged as production delays meant that the season was cut by four episodes. Hopefully we should see this plotline developed next season instead.

The third season of Rick and Morty (****) is therefore watchable, reliably entertaining and full of quite a few genuine laughs and thought-provoking moments. However, it's arguably the least consistent in terms of quality, some storylines are not really well-developed and its decision to stare into the rotten soul of Rick for episodes on end can become repetitive. There's also a distinct lack of memorable new characters this year. But it remains one of the most interesting and amusing animated shows on air.

The series is available to watch now via Adult Swim in the US and Netflix in the UK and most other territories.
Posted by Adam Whitehead at 18:57