An alternate-history 1946. Nazi Germany, its military enhanced by advanced technology and supernatural forces, is in the cusp of winning the war. In a last-ditch effort to stop them, a joint British-US assault is launched on the fortress headquarters of "Deathshead", the genius behind the Nazi's advanced technology. The assault goes badly wrong and American war hero B.J. Blazkowicz is left in a coma for fourteen years. When he wakes up, the entire world has been conquered by the Nazis. He decides to join forces with an underground resistance in Berlin and sets about liberating the planet from the oppressors. 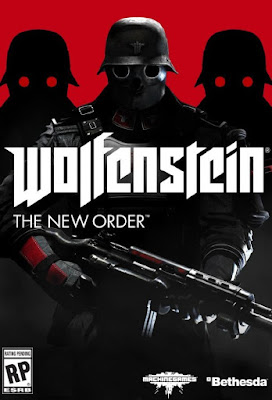 Wolfenstein: The New Order, originally released in 2014, is likewise a reboot of the series, but confusingly the events of the previous two games are still considered to have, in general, happened, but the games themselves are not necessarily canon. This "soft reboot" means that you can start playing The New Order with no foreknowledge of the series, as the game quickly brings you up to speed on what's going on.

Wolfenstein: The New Order is a classic first-person shooter. You view events from Blazkowicz's perspective as you make your way through numerous missions. In each mission your objective is to secure something - usually files, a device or prisoners - and then escape, usually in the face of stiff resistance. Each mission usually involves a titanic amount of combat, although there is a surprisingly robust stealth mode where you can use silent takedowns, knives and silenced weapons to progress without triggering alarms and massive retaliation from the enemy. Later missions feature powerful robot or mech enemies who can be taken down, however, leaving combat as the only way forwards.

There's also more story-focused interludes which take place between missions when you return to Resistance HQ under Berlin. In these sequences you can talk to other characters, undertake side-missions and learn more information about the Nazi-conquered world. Rather unexpectedly, there's also a romance that Blazkowicz can pursue with another character, which then leads to further revelations about the world and the background to the game.

Overall, The New Order is a very solid FPS. It features some crazy, intense action sequences that are fitting to its franchise origins as well as some very good stealth options. Unexpectedly, the game leans into the BioShock/Half-Life model of depicting an in-depth narrative through environmental information, optional conversations and the creation of a particular and effectively bleak atmosphere. The New Order is effectively a game about a hero killing a truly spectacular number of Nazis, but it plays its material straight and it doesn't hold back on the horrors of the Nazi regime. One mission takes place in a concentration camp, whilst another takes place in a lab where the Nazis perform experiments on live human subjects. I was expecting this to lead to a tonal mismatch, but that never happens, the game moving from a WWII military shooter to a more sci-fi approach via a pulp action game without ever coming across as campy. It's a startling balancing act and one the game pulls off with aplomb. 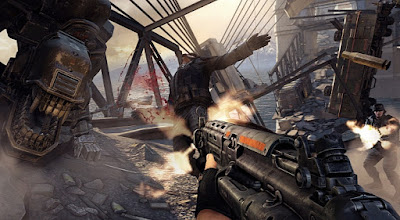 The characters in the game are memorable, from disabled rebel commander Caroline Becker to guitar-playing exile "J" to one of Blazkowicz's war buddies (you choose which one to save early in the game, which results in a moderately different timeline unfolding for the rest of the game). The game spends a welcome amount of time fleshing out these characters in sequences set back at the rebel base and in dialogue between the characters which is unusually well-written. Your band of rebels is a cool bunch of people to hang out with and I was disappointed more wasn't done with this aspect of the game.

The action itself is satisfyingly frenetic, with the stealth options allowing you change things up a bit if you so choose. The game doesn't force a redundant cover system on you, nor does it feature regenerating health, the most tiresome crutches of the modern FPS. Most welcome, it doesn't limit you to two or three guns. Instead you can carry round your entire arsenal with you at a time and can even dual-wield almost every weapon in the game. You also have a laser which can be used offensively or as a cutting tool to solve environmental puzzles (it's basically this game's version of Half-Life 2's Gravity Gun, and is quite good fun).

There aren't too many negatives. The game's length at around 10 hours is a bit disappointing by old-school FPS standards, but by the standards of almost every FPS released in the last ten years it's actually quite decent. The latter part of the game feels a bit rushed and the final boss fight is a little bit preposterous, even by the standards of the rest of the game. The game is also fairly easy: playing on the medium difficulty level, there were a couple of brief difficulty spikes but otherwise it's a pretty straightforward game that throws weapons, health and armour at you in near-ridiculous quantities.

Wolfenstein: The New Order (****½) is a fun, surprisingly well-written and very well-characterised action/stealth game that pulls off exactly what it's trying to achieve. The game is available now in the UK (PC, PS4, X-Box One and USA (PC, PS4, X-Box One). An expansion, The Old Blood and a sequel, Wolfenstein II: The New Colossus, are available now.
Posted by Adam Whitehead at 21:32

Thanks for putting this together, Wert!

On conspicuous absence: The Black Company. Is this intentional or an oversight?