On 20 November 2007 the video game company BioWare took one of the biggest risks in their history by releasing what was only their third original game, not one set in a pre-existing universe. The first, Jade Empire (2005), had been extremely good but had not set the world on fire. Given that BioWare had bet the farm on them moving into original, creator-owned IPs, they needed their new game to be a success. It was called Mass Effect and, rather fortunately, it was. 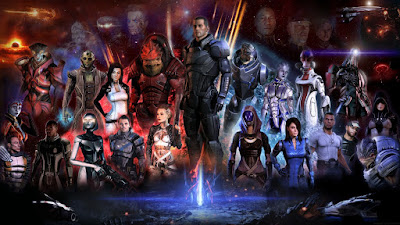 BioWare had been founded in Canada in 1995 by newly-graduated medical doctors Ray Muzyka, Greg Zeschuk and Augustine Yip. Using programming knowledge gained from other courses taken alongside their medical studies, they created a video game called Shattered Steel. It was published by Interplay and was a very modest success. Yip decided to return to practising medicine whilst Muzyka and Zeschuk moved into full-time development. Their second game came about during discussions with Interplay, who wanted to use the Dungeons and Dragons licence they'd just acquired (at a steal) from TSR, Inc. BioWare created a new video game engine, which they dubbed "Infinity", which blew away the team at Interplay and led to them getting the commission to make a massive fantasy roleplaying game. For a brand new studio it was a big achievement...and a huge responsibility.

Fortunately the two doctors and their rapidly expanding team were up to the job. They released Baldur's Gate in 1998 and it was an enormous success. They branched into console development with MDK2 (2000) but their hearts had been stolen by character and story-focused roleplaying games, games which emphasised character developments and even romances over magical explosions and loot. Baldur's Gate II: Shadows of Amn (2000) was an even bigger success than its forebear, whilst Interplay's in-house Black Isle Studios used the Infinity Engine to craft the excellent games Planescape: Torment (1999), Icewind Dale (2000) and Icewind Dale II (2002).

BioWare then created a new engine, the Aurora Engine, to power a new D&D roleplaying game. Neverwinter Nights (2002) was also a big success, although more for its incredibly powerful campaign-creation system allowing players to recreate the D&D experience online than the game's own, pedestrian story (the game's expansions were rather better-received). By this time BioWare had become arguably the most feted RPG design studio on the planet, so were the perfect collaborators for LucasArts, who wanted to make the first-ever Star Wars roleplaying game. The result, Knights of the Old Republic, was released in 2003 and was a huge success, one of the best RPGs of all time and possibly the finest single Star Wars video game ever made (a distinction it comfortably holds today, despite a serious challenge from Jedi Outcast and TIE Fighter).

At the very height of their success and critical acclaim, BioWare chose to give it up and begin working on their own, original titles. They encouraged their partner companies to dish the sequels out to the old Black Isle team, now rising out of the ashes of the collapsed Interplay as Obsidian Entertainment. Obsidian made the well-regarded (if buggy) Knights of the Old Republic II (2004) and Neverwinter Nights II (2007) whilst BioWare began their assault on the original IP space.

BioWare began developing three original games. The first was a martial arts roleplaying game called Jade Empire, using the Knights of the Old Republic engine. The game came out in 2005 and was an original X-Box title. It was a modest success, but not the mega-selling hit BioWare had been hoping for. They also began working on a new fantasy IP, a vast and expansive RPG using a whole new engine which would be a "spiritual successor" to Baldur's Gate. The game eventually went way over time and budget, but was ultimately released in 2009 under the name Dragon Age. Fortunately it was a big hit and went to spawn two sequels (and a third, under the working title Dragon Age IV, is currently in development).

Alongside these titles, BioWare began working on a science fiction RPG. They wanted to do something different for this game and that was to make an epic space opera in every sense of the word: a game with a deep, detailed backstory, lots of alien races and a growing menace which would eventually, over the course of three games, build into an apocalyptic threat. BioWare also really wanted to nail the things they'd always been applauded for - deep, interesting characters complete with friendships, interrelationships and even romances - but using modern 3D technology to make the characters more relateable and convincing than ever before. 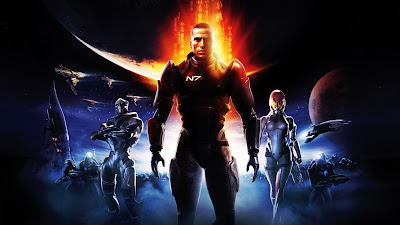 Released in November 2007, Mass Effect fulfilled those goals. The player takes on the role of Commander Shepard, a resourceful military officer in the Systems Alliance (a future human government) and the first human "Spectre", a special forces agent tasked with dealing with massive threats to the Citadel, a multi-racial alliance based in a huge, ancient, alien space station. Saren Arterius, a rogue Turian Spectre, begins undertaking strange attacks against Citadel forces and Shepard is assigned to stop him, using a starship called the Normandy and a multi-ethnic crew of humans and aliens. The game ranges across a large chunk of the Milky War galaxy and, as the story developers, Shepard is forced to make a number of huge decisions with extremely far-reaching consequences. Literally, the fate of entire species is in Shepard's hands.

The game was widely praised for the customisability of the character. Shepard could be male (voiced by Marc Meer) or female (voiced by Jennifer Hale) and their physical appearance could be tweaked considerably. They could also be "good" (Paragon) or "evil" (Renegade) based on moral decisions they made throughout the game. Companion characters could be permanently killed off, along with allies and enemies (who would then go on to appear - or not - in the sequels). This led to a game with a set storyline but where the details of that story could completely change from player to player.

At the end of the game it is confirmed that Saren is working for a powerful alien race called the Reapers, a biomechanical nightmare that emerges every few millennia to wipe out advanced spacefaring races for unknown reasons. The overwhelming threat of the Reapers became the driving force behind the sequels.

Mass Effect sold well on release and was critically acclaimed, appeasing BioWare's new owners Electronic Arts (who were rather less happy with the long gestation period and enormous budget of Dragon Age, eventually mandating a low-budget, quickie sequel to help justify the cost of the first game). It was followed by Mass Effect 2 in 2010 and Mass Effect 3 in 2012. These games increased the emphasis on characterisation and story whilst refining combat (both games saw a reduction in traditional RPG gameplay elements, such as inventory management, to the ire of some fans). Mass Effect 3's release in March 2012 was highly controversial, with a badly-written ending that many fans felt was unsatisfying. BioWare released patches and DLC which reworked the ending and improved it, but it remained a dubious decision.

Despite the poorly-received ending of the third game, the Mass Effect series remains generally well-regarded. It's a big-budget, combat-focused space opera game which nevertheless emphasises relationships, dialogue and story over mass slaughter. There's a lot of good writing, moments of great humour and some canny characterisation in the trilogy, and the degree to which you can change things so entire races can be absent from later games in the series is remarkable. Mass Effect was also highly notable in that it was almost the only new space opera universe to appear on screen in the first decade of the 21st Century (The Expanse and SyFy label-mates Killjoys and Dark Matter eventually helped end that drought). The game trilogy eventually went on to sell about 20 million copies, which although not setting the world on fire (Fallout 4, for example, sold over half that in its first 24 hours on sale) is very impressive for a single-player-focused, narratively-driven game series.

Unfortunately, Mass Effect's legacy has not been enduring. The fourth Mass Effect game, Mass Effect: Andromeda was released in 2017 and faced a seriously mixed reception, with technical issues and a bland storyline. The game sold 2 million copies in its first six months on sale, which was far below EA and BioWare's expectations and led to the series being put on hiatus (despite two sequels to Andromeda being in the planning stages). BioWare are now focusing on Dragon Age IV and a whole-new IP, an action game called Anthem. Not only is the future of Mass Effect itself in doubt, EA seems to be down on the whole idea of single-player-focused games with strong stories altogether, preferring big "open world" games or multiplayer.

Although flawed, the original Mass Effect trilogy remains a compelling gaming experience and well worth a look if you haven't yet given it a try. The complete trilogy is available now for the PlayStation 3, X-Box 360, X-Box One and PC.


Thank you for reading The Wertzone. To help me provide better content, please consider contributing to my Patreon page and other funding methods, which will also get you exclusive content weeks before it goes live on my blogs. The Cities of Fantasy series is debuting on my Patreon feed and you can read it there one month before being published on the Wertzone.
Posted by Adam Whitehead at 21:05

Mass Effect is one of those strange trilogy where the middle game is the best of the lot. Mass Effect 2 is one of the best sci-fi games ever. Too bad about Andromeda. I personally don't think it's a bad game but it just doesn't compare to the Mass Effect games that came before it.

The trilogy is available on PS4?