SF&F Questions: Do balrogs have wings?

In this article I will examine the single most controversial mystery that J.R.R. Tolkien left unresolved in his Middle-earth legendarium, namely... 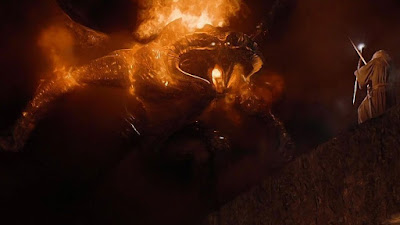 Do balrogs have wings?
In the first book of The Lord of the Rings, The Fellowship of the Ring, the titular companions have to pass through the Mines of Moria, an ancient dwarven fortress, in order to continue on their way to Mordor. Just when it seems they will survive unharmed, they are attacked by a balrog, a demon of the ancient world who has remained in hiding in the deep places under the earth for thousands of years. Gandalf battles the balrog, is defeated and is apparently killed in the process (spoiler: he gets better).

In the years since the publication of the book fans have struggled with descriptions of the creature, which are contradictory, in particular the notion of the balrog possessing wings.

Tolkien originally created the balrogs in the late 1910s or early 1920s. He envisaged balrogs as being servants of the Dark Lord Morgoth, of a lesser order than dragons but greater than orcs or trolls. The early versions of The Silmarillion, then called The Book of Lost Tales, depict the balrogs as humanoid and varying in size, with the largest being roughly twice the size of a man. They use whips of fire and longswords in battle and are formidable, but can be defeated by both men and elves. In numerous descriptions and appearances, these creatures are never once mentioned as having wings. Indeed, in the original assault on Gondolin a number of balrogs are mentioned as riding on the backs of dragons.

This version of the balrog apparently survived until Tolkien began writing The Lord of the Rings in 1937. When the balrog first appears in Moria, Tolkien describes it thusly:

"A figure strode to the fissure, no more than man-high yet terror seemed to go before it. They could see the furnace-fire of its eyes from afar; its arms were very long; it had a red tongue."

If Tolkien was willing to describe the length of its arms and the colour of its tongue, I think we can assume that it having wings would have been mentioned.

During the extensive rewrites of the book, Tolkien expanded the description of the creature significantly:

“The Balrog reached the bridge. Gandalf stood in the middle of the span, leaning on the staff in his left hand, but in his other hand Glamdring gleamed, cold and white. His enemy halted again, facing him, and the shadow about it reached out like two vast wings. It raised the whip, and the thongs whined and cracked. Fire came from its nostrils. But Gandalf stood firm.

The Balrog made no answer. The fire in it seemed to die, but the darkness grew. It stepped forward slowly onto the bridge, and suddenly it drew itself up to a great height, and its wings were spread from wall to wall; but still Gandalf could be seen, glimmering in the gloom; he seemed small, and altogether alone: grey and bent, like a wizened tree before the onset of a storm. 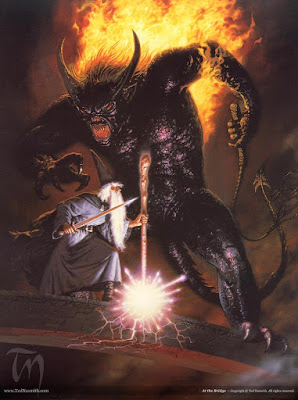 In this description the Balrog appears to be a much larger creature and is described as being wreathed in shadow "like wings", rather than the entity having wings itself. These shadows then extend "from wall to wall" like wings, but the wording here is ambiguous enough to allow many fans to believe that Tolkien was talking figuratively and literally, and the balrog actually does have wings.

During the last years of his life, Tolkien reconceptualised much of his legendarium, although very little of this work was completed before his death in 1973. He was going to change the names of several key characters, introduce a different origin for the orcs (feeling that all of them being completely evil was not believable) and also settle on a final and considerably more complex origin story for Galadriel and Celeborn. As part of these changes, he discussed with his son Christopher an idea that there would only be seven balrogs, making their destruction in battle a very significant event. It may be that Tolkien would have answered the wing question as well but he passed before that could be done.

The question of whether balrogs had wings was never addressed to Tolkien himself: only seven years passed between The Lord of the Rings hitting massive success levels (thanks to the 1966 paperback edition of the novel being released in the USA) and his death, and the wing question really only seemed to get going after Ralph Bakshi's 1978 animated movie, which depicts the balrog not only with wings but capable of flight. Artists like John Howe were soon depicting the balrog as winged and Peter Jackson's live-action trilogy likewise features the creature with wings. The question really only became popular thanks to the Internet, and a focal point for Tolkien "purists" who felt that the books did not conclude that the balrogs had wings and it was the simplistic adaptations that had made a mistake.

Answering the question definitively may therefore not be 100% possible, but we should consider the fact that balrogs appear on multiple occasions in The Silmarillion (in both the final version and the earlier Book of Lost Tales draft) and are never mentioned once as having wings. The earliest versions of the balrogs definitively couldn't fly (being reliant on dragon mounts) and it's this version that seems to have survived until the 1930s and the initial writing of The Lord of the Rings. By the time of Tolkien rewriting the book in the late 1940s, the balrog became a much larger and more powerful creature, with Tolkien adding additional details and capabilities. However, we should consider that, if the balrog had wings, why could it not simply fly out of the abyss of Khazad-dum?

For myself, this last point is telling, and in fact the Ralph Bakshi film makes this sequence look ludicrous if the balrog indeed has wings: the balrog is shown flying down to the bridge, is defeated by Gandalf, and simply falls off without trying to fly. The Jackson depiction shows the wings as being of fire and possibly decorative (and Jackson never depicts the balrog flying), which may make a little more sense.

As a result of this:

Answer: On the balance of probability, balrogs do not have wings. However, if they do then they are vestigial or decorative and the creatures are not capable of flight.

Thank you for reading The Wertzone. To help me provide better content, please consider contributing to my Patreon page and other funding methods, which will also get you exclusive content weeks before it goes live on my blogs. The Cities of Fantasy series is debuting on my Patreon feed and you can read it there one month before being published on the Wertzone.
Posted by Adam Whitehead at 20:10