Dragonlance authors Margaret Weis and Tracy Hickman have ended their legal case against Wizards of the Coast. The two authors were suing the company for $10 million for breach of contract after attempting to terminate a book deal for a new Dragonlance trilogy when the authors had already completed almost half the work. 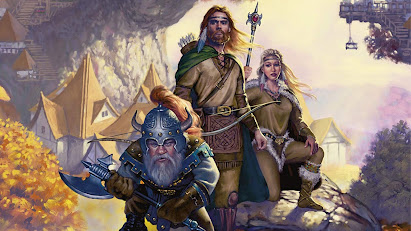 Legal filings confirm that Weis and Hickman themselves ended the case and on Twitter, Weis promises "exciting news in the weeks to come." From the tone of this, it sounds like an amicable settlement has reached and the project will likely see print after all.
Confirmation of that news when it is confirmed.
Posted by Adam Whitehead at 23:28

A Shame. I thought the legal battle would be more entertaining than anything likely to be in the books.

Angel of the Dawn said...

My main concern with litigation is that it might have gone poorly for Wizards of the Coast. And I have a lot more vested in them than Weis and Hickman.

I'm mildly interested to see game material for Dragonlance, because I'll shamelessly borrow from campaign settings for my own games. But I can't say the prospect of new DL novels is attractive at all.

Anyway, the case was dismissed without prejudice, so it can always be filed again. I'll keep my fingers crossed for WotC. Gale Force Nine is in the process of suing them too.