HBO unveils concept art for HOUSE OF THE DRAGON

HBO has unveiled concept art for two of the dragons which will appear in its upcoming Game of Thrones prequel/spin-off, House of the Dragon. 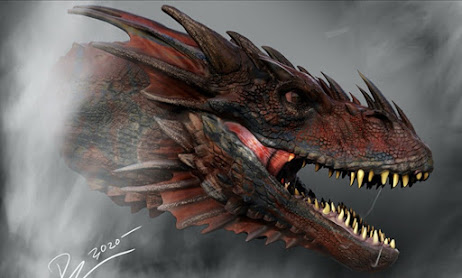 Set 170 years before the events of Game of Thrones, House of the Dragon tells the story of the Dance of Dragons, the civil war between two branches of House Targaryen. The Targaryens are at the height of their power at this point in history, with dozens of members across several branches of the family and more than a dozen dragons under their command. The king has named his eldest daughter as his heir, but, upon his death, her ascent is disputed by her younger half-brother, setting the scene for war.

The dragons have not yet been identified, but based on their colouring it's likely the first dragon is Sunfyre, the steed of the would-be King Aegon II Targaryen, whilst the second may be Caraxes, the steed of Prince Daemon Targaryen.

House of the Dragon is currently undergoing casting and pre-production. Paddy Considine was recently announced as King Aegon II, whilst unconfirmed rumours this week have suggested that former Doctor Who actor Matt Smith may circling the role of Prince Daemon.

House of the Dragon will be showrun by Ryan Condal (Colony) and acclaimed Thrones director Miguel Sapochnik, with absolutely no involvement from Game of Thrones showrunners David Benioff or D.B. Weiss whatsoever. It is expected to start shooting in the UK in the spring for a 2022 debut.