Lyra Belacqua and Will Parry, both citizens of Oxford but in different worlds, meet in an abandoned city alien to them both. They find respite from their individual travails, but their journey is not yet done. Destiny guides them to an encounter with the mysterious Subtle Knife, which has the power to change the fates of universes, but the Magisterium and the enigmatic Ms. Coulter are on their trail. 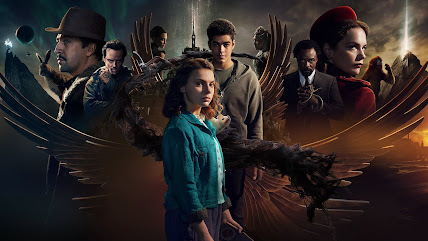 The first season of His Dark Materials was a reasonably solid adaptation of Philip Pullman's novel Northern Lights (retitled The Golden Compass in the US). It took advantage of its eight-hour running time to deliver a more in-depth, thoughtful and resonant version of the story than the perfunctory 2007 movie, although it may have also had a little bit too much time, with some issues with pacing. The season also suffered from a surprisingly subdued performance by Dafne Keen as the spirited Lyra (a problem of direction, not the actress, it should be emphasised) and a distinct lack of daemons in scenes which should have had lots of them in evidence.
Season 2 is an improvement on every single level. With seven episodes to adapt the second book in the trilogy, The Subtle Knife, the pacing is punchier and works better. Keen is more energetic and more in keeping with the Lyra from the books, and the show is positively awash with daemons when necessary. HBO came on board the project whilst the first season was filming, so it looks like their cash injection helped the second season overcome some of the budgetary constraints that were a little more evident in the first season (despite reports of this being one of the most expensive BBC dramas ever made).
The second season is also more expansive. As well as the main story being more evenly split between Lyra and Will, there's also hefty storylines for Lee Scoresby, the witches, Ms. Coulter, the Magisterium leaders back on Lyra's world and dark matter scientist Dr. Mary Malone. The sense of scope and scale is matched by the production values, which convincingly depict multiple worlds and the action transpiring in them, and the superb set design for the city of Cittagàzze.
Some complaints may be unavoidable ones from the book: the abrupt jettisoning of much of Season 1's supporting cast feels a little jarring (especially the near-total absence of Asriel), and Pullman's intellectual approach and thematic ideas sometimes makes this a story more told from the head than the heart. But the escalating tension and increasing ruthless streak (especially from Ms. Coulter) also make the season more tense and unpredictable, at least to those who have not read the books.
The second season of His Dark Materials (****½) improves over the prior outing on almost level, being more epic, better-written and more impressive in scale and scope. It is available to watch via the BBC iPlayer in the UK and HBO in the United States.
A third season, depicting the final book in the trilogy, The Amber Spyglass, is in the planning stages but has not yet been greenlit.
Posted by Adam Whitehead at 15:16

I suspect the reason audience figures are falling, is that without the hype of the novels, His Dark Materials resembles the most generic post-Hunger Games YA film I can think of. I haven't watched The Golden Compass since it had its run in movie theatres, but I'm beginning to doubt the series on the overall will be better than the movie.

As a fan of the books (Northern Lights in particular - the appeal of the series slowly declines through the second and third books as Will's mary sueness takes center stage and Lyra is relegated to the background), watching His Dark Materials is an exercise in frustration. How is it possible to get so much of it wrong? How is it possible to consistently fail to deliver the emotional payoff of scenes that in the books seem so chilling, touching, awe-inspiring?

Wherever the books are subdued, the series is LOUD - just look at the Dementor-like Specters making generic Fantasy predator grunting noises, like LOTR monsters. We actually get Specter jumpscares. Specter jumpscares. Name a more transparent statement of creative bankruptcy, I dare you.

Wherever the books say something with force, like the boy in the fishing village cut away from his daemon - the series looks the other way, has nothing to say, distracts us with some other nonsense. Look! Orange light, blue shadows, isn't it pretty?

Reviewing it must be frustrating as well. How can something that looks so good be so mediocre? The series is great in all the respects that can be bought with money: actors, set design, costumes, props. But you can't buy inspiration. Just a little inspiration would have gone a long way, instead of running everything by the playbook: scheming Magisterium goons in their Jedi Temple, the protagonists' scenes of trust-building, the God-forsaken Specter jumpscares.

Speaking of God - where is the criticism of religion that the TV series was supposed to not shy away from? If you squint hard at the Magisterium logo, you can see a cross-of-sorts in there. Sometimes they say foreign words like "cardinal" and "heretic". That's it for Philip Pullman's celebrated antithesis to the Christian allegory of Narnia.

The novels were about ideas. The series is about moving characters between plot checkpoints.

Watching discussions of this series, the conflict of people pointing out the mediocrity versus those who love it - it reminds me so much of similar discussion of The Hobbit movies. Today, there's a fairly well established consensus that the trilogy is best forgotten, but back in the days of their theather run, there were loads of people insisting they were really good, that the critics just didn't understand what it means to adapt a novel to the screen, that the director had to use such and such trope, otherwise nobody would watch, and so on.

Is His Dark Materials really good? You can argue with me, but you can't argue with figures. Viewership is down, despite massive marketing. We can despise the cultural tastes of the average Western TV viewer, but at the end of the day the statistics is a good estimator of quality. People have better things to do with their time than watching His Dark Materials, a show that leaves most of us unmoved.

This was a dark rant, so let's end it on a hopeful tone. This "trailer" for a non-existing movie shows what kind of adaptation Philip Pullman truly deserves: https://vimeo.com/441033955?1&ref=fb-share&fbclid=IwAR1-Ux4iJrxI-dcfhZpJQMeGOIluyHqn_e_KLq53qScoDyx2gn10QQiAJa8