The Mandalorian has reluctantly embraced his new role as the guardian of "the Child," a youngster belonging to the same species as Jedi Master Yoda. Deciding he needs to track down the Jedi to return the Child to them, he embarks on a journey across the galaxy, encountering allies new and old and enemies familiar and unfamiliar. His epic quest will lead him to a fateful meeting with former Jedi padawan Ahsoka Tano, agents of the New Republic and soldiers of the Imperial Remnant. However, his movements are being tracked by Moff Gideon, who seeks the Child for his own ends. 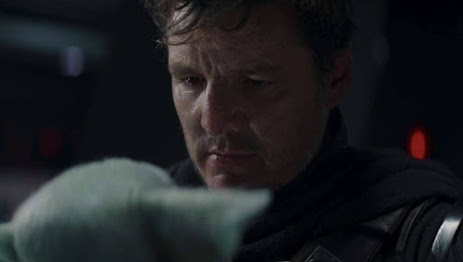 The first season of The Mandalorian was a winner, an epic space Western playing out on different planets which tapped into the soul and spirit of Star Wars in a manner not seen in live action for many years. Jon Favreau and Dave Filoni, veterans of the Star Wars animated series The Clone Wars and Rebels, successfully delivered a series of episodes full of action, adventure, warmth, wit, character and, in the form of "Baby Yoda," even charm.
Following up on that breakout season was always going to be tough and the second season of The Mandalorian at times struggles with the format. With Season 1 ramping up from an episodic format at the start of the season to a more serialised feeling at the end, Season 2 reverting to a more monster/planet/villain-of-the-week format for its first few episodes feels a tad jarring. Fortunately these episodes are pretty good: Mando and Cobb Vanth (Deadwood and Justified's Timothy Olyphant) teaming up to take down a krayt dragon and Mando teaming up with Bo-Katan Kryze of Mandalore (Battlestar Galactica's Katee Sackhoff) to take out an Imperial enemy. An intermediary episode, where the Mandalorian and a random alien frog get stuck on an ice planet full of ice spiders, is weird but somewhat amusing (and gives us some solid X-wing action).
The back half of the season is really strong though. Things kick off with the long-expected debut of Rosario Dawson in the fan-favourite animated role of Ahsoka Tano in a gripping, strongly Kurosawa-influenced tale of confrontation and conflict (with some stunning individual images). Things continue with the Mandalorian forming an unholy alliance with Boba Fett (a returning Temuera Morrison from the prequel movies) and reteaming with Season 1's Migs (Bill Burr) to infiltrate an Imperial base, before an all-action finale awash with cool moments and character cameos.
The Mandalorian's strength so far has been tapping into George Lucas's original idea of Star Wars as a series of matinee pulp adventures and delivering that to the hilt. Performances are solid (especially Pedro Pascal as the taciturn hero), the visual effects among the finest ever created for television and the sense of pacing is strong. Quite a few episodes of The Mandalorian come in at well below the traditional 60 minutes (some scraping in at around 35 minutes), and although more would be nice, it's hard to deny the relentless, fierce sense of purpose this gives the show.
The finale also gives a nice moment of closure to the story that began in the debut episode of the series. Clearly, the adventures of the Mandalorian will continue (a third season has been confirmed, and three direct spin-off shows focusing on the New Republic, Ahsoka and Boba Fett are in the planning stages) but this first storyline is now given a reasonably satisfying sense of closure.
The second season of The Mandalorian (****½) continues in much the same vein as the first, delivering an adrenalin shot of pure Star Wars action right to the heart. It is available to watch worldwide now on Disney+.
Posted by Adam Whitehead at 20:01