British-Australian actor Hugh Keays-Byrne, well-known for his villainous turns in the Mad Max film series, has sadly passed away at the age of 73. 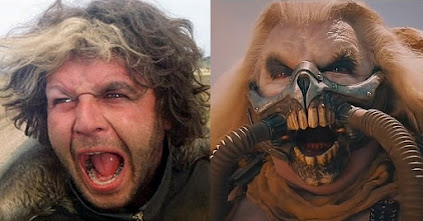 Keays-Byrne was born in India to British parents. Raised in the United Kingdom, he joined the Royal Shakespeare Company in 1968 and appeared in numerous productions. One production, A Midsummer Night's Dream, took him to Australia in 1973. He decided to remain in the country when the tour ended and switched to acting down under. He snapped up roles in the TV shows Essington (1974) and Rush (1974, winning the actor a Logie Award) and the films Stone (1974), The Man from Hong Kong (1975), Mad Dog Morgan (1976), The Trespassers (1976), Blue Fin (1978) and Snapshot (1979).

In 1979 he starred as Toecutter, the primary villain in George Miller's Mad Max, acting opposite Mel Gibson. His earlier role in Stone, a film about biker gangs, helped inspire Miller's development of the story for the movie. Keays-Byrne was nominated for an Australian Academy Award (AACTA) for Best Supporting Actor for his turn in the film.

He continued to act in film and in television. In 2001 he was cast as in the character of Grunchlk on the TV series Farscape. He appeared in two episodes in the second and third seasons, as well as the Peacekeeper Wars mini-series that wrapped up the main story arc.

He was re-recruited by George Miller in 2015 to play the role of Immortan Joe, the main villain of Mad Max: Fury Road. This became his last acting credit.

Miller is currently prepping Furiosa, a prequel to Fury Road, but it is unknown if Keays-Byrne was due to reprise his role.