Lucasfilm and Disney have confirmed that a Boba Fett TV series, entitled The Book of Boba Fett, will debut on Disney+ in December 2021. 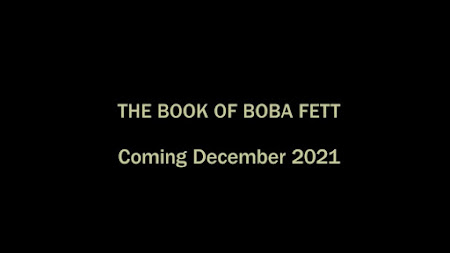 This show is in addition to the slew of new projects recently announced by Lucasfilm. The announcement was made in a surprise, post-credits sequence to the Season 2 finale of The Mandalorian, which sees Boba and associate Fennec Shand (Ming-Na Wen) join forces to take over a familiar crime operation from the Star Wars movies. It is assumed the series will focus on Fett's new role as a crime lord.
It has so far not been confirmed if Ming-Na Wen will be a regular in the series as Fennec Shand, although the finale implies as match. It's also so far unconfirmed if the series will follow, precede or run alongside the third season of The Mandalorian.
The Mandalorian's other direct spin-off shows, Rangers of the New Republic and Ahsoka, are not expected to debut until 2022 at the earliest. Disney are already filming Rogue One prequel mini-series Andor and in pre-production on event series Obi-Wan Kenobi, and are also developing a Lando Calrissian-focused series and The Acolyte, an original series set 200 years before The Phantom Menace. Disney are also developing animated series Visions and A Droid Story, and deep in production on The Bad Batch, a Clone Wars sequel series expected to air in 2021.
Posted by Adam Whitehead at 14:42

I guess the big question is whether this is a separate spin off show since it wasn't mentioned in Disney's recent new show announcements. I've seen some speculation that, given that it's due to premiere at the same time as The Mandalorian season 3, The Book of Boba Fett will actually BE The Mandalorian season 3 because it seems unlikely that Disney would have two Mandalorian shows running in parallel.

I guess we'll have to wait and see.