2371. The Federation is facing its greatest threat since the Borg: the Dominion, a powerful empire in the Gamma Quadrant which is no longer willing to tolerate violations of their territory. The fear of shapeshifters infiltrating the Alpha Quadrant will lead to desperate measures being taken to head off the threat, and the assignment of the Federation's most powerful combat vessel to the front line at Deep Space Nine. 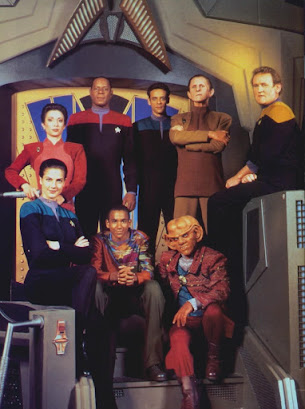 There is a strong belief that Star Trek shows - at least those since the original series - only start getting good with their third season. Star Trek: The Next Generation's first two seasons were highly variable and only started producing reliably good episodes in its third year, whilst Enterprise only really got going when it embraced a serialised storyline in its third season. The third season of Discovery has also (so far) been a big improvement over the first two, patchy years.

This wasn't quite as true of Deep Space Nine, which started reasonably well with one of the franchises's best debut seasons and levelled up impressively in its second outing. Instead, the third season represented a continuation of the smooth improvement in quality the show experienced over its first four seasons.

The season has several recurring storylines. The show isn't really serialised in the same as quasi-rival Babylon 5 (at least at this stage), but it did make greater use of continuity and references than previously. This is apparent in the first, two-part story The Search, which picks up on the cliffhanger ending to the second season which established the Dominion as a major threat. In The Search, which marks the writing debut for DS9 of TNG writer (and future BSG and Outlander showrunner) Ronald D. Moore, the show gets a new asset in the form of the USS Defiant, an experimental warship to help defend against the threat and also provide the crew with a better way of getting around than the tiny runabouts. In a notable plot development, Odo also discovers where he came from and more about his people, including some very unpleasant truths. It's a solid action story, although some elements in the second part prove disappointing.

The season goes onto have a long streak of pretty good episodes. The House of Quark is a culture-clash comedy between the Ferengi and Klingons but which also gives Quark the chance to be heroic (as well as introducing Next Generation fan-favourite Gowron to DS9). Second Skin sees Kira discovering she's an undercover Cardassian spy with false-implanted Bajoran memories. The episode doesn't waste time trying to really convince the viewer this might be true, but the reasoning for the deception is intriguing. Civil Defense is a superbly entertaining disaster movie episode where the station's old anti-uprising security system is accidentally reactivated and goes haywire. Defiant is another great action story, using a visiting Thomas Riker to set off a desperate battle with the Cardassians with Sisko reluctantly joining forces with Gul Dukat to shoot down one of his own ships (in a manner similar to the 1964 film Fail Safe). Shakaar sees Kira forced to resume her life as a freedom fighter when Kai Winn cracks down on a group of farmers who defy her, resulting in a terrific Western-style action show. Through the Looking Glass returns to the Mirror Universe and achieves some nice character reflection by uniting Sisko with the mirror counterpart of his deceased wife (although the fact the Sisko sleeps with both the mirror Dax and mirror Kira in this episode is kind of brushed over).

The Past Tense two-parter starts a trend for DS9 episodes for directly engaging with difficult social issues rather than using some kind of standard Star Trek metaphor for them. The episode directly transports Sisko, Dax and Bashir to 2024 San Francisco, which is riven by immense wealth inequality and homelessness, and having to deal with the problems they encounter before returning home. It's an extremely strong two-parter with great performances. Later on the season blows up the Dominion threat even further with Improbable Cause and The Die is Cast, a far-reaching two-parter which sees the Romulans and Cardassians join forces for a secret strike on the Founders' homeworld, with Odo and Garak reluctantly dragged along for the wide.

Heart of Stone and Destiny are very solid character pieces, reflecting on Odo's growing realisation he is in love with Major Kira and on Sisko's position as the Emissary causing conflict with his position as a Starfleet officer. Visionary is the season's regular "let's torture O'Brien" episode and has him shifting randomly in time as part of shenanigans with the Romulans. Explorers sees DS9 engaging with real, solid piece of hard SF, the idea of using "light sails" to cross interstellar space, and makes a very good fist of it. Family Business introduces Quark's mother, the Ferengi homeworld and the character of "Brunt, FCA," played with an outright genius performance by Jeffrey Combs. As a piece of worldbuilding for the Ferengi, it is terrific. The season finale, The Adversary, is low-key but a solid bit of tension as a changeling infiltrator plays cat and mouse with the crew on The Defiant.

Other episodes have good notions but mixed execution. The Abandoned is a simple rewrite of TNG's I, Borg, with a Jem'Hadar in place of a Borg, but falters due to a lack of focus: it's an Odo episode where it takes more than a third of the episode to get Odo involved in the story, with a somewhat weak resolution. Meridian has a great central premise - a planet that only appears for a few days every few decades, and Dax falls in love with one of the inhabitants - but doesn't do much with it. Life Support sees Vedek Bareil taking part in urgent peace negotiations with the Cardassians despite being heavily injured and the treatments he seeks to keep going threatens his life. TNG had similar ideas in both Too Short a Season and Loud as a Whisper and Life Support offers no new insights on the premise.

Prophet Motive is a very promising Ferengi episode and Wallace Shawn is always great as the Grand Nagus, but it feels the episode doesn't quite deliver on its premise of fleshing out the Ferengi ideology of capitalist greed, though it is quite amusing that Quark of all people becomes the second person to successfully communicate with the Prophets. Equilibrium and Facets are great for fleshing out Dax's backstory (the prior in a manner similar to what Doctor Who has since done, twice) but neither episode quite catches fire.

There's very few outright weak links in the season. Fascination - where a visiting Betazoid gets sick and telepathically "infects" the regular characters with romantic feelings for random people - is tedious. Distant Voices may be one of DS9's absolute nadirs, a poorly-conceived dream episode about Bashir's fear of aging which doesn't really accomplish much.

With weak episodes few and far between and a growing sense of menace and danger building across the season as the threat from the Dominion escalates, complete with the first major fleet battles in Star Trek's history, Deep Space Nine's third season (****½) is an accomplished, strong piece of work. The season is available on DVD in the USA and UK, as well as on CBS All Access in the States and Netflix in the UK.

Note: I previously reviewed DS9's third season as part of a wider review of the third through fifth seasons twelve years ago. That review can be read here.