When Star Trek: The Next Generation entered its third season, it was in trouble. The critical reception to the show's second year had been mixed, producer and effective showrunner (under Rick Berman) Maurice Hurley had left and the cast were unhappy with the removal of Gates McFadden as Dr. Beverly Crusher. As the third season opened, Rick Berman had to hire a largely new writing team, a new showrunner and had to bring back McFadden to appease the rest of the cast (particularly Patrick Stewart). Fortunately for his show and for the fans, Berman was lucky. The new showrunner was the talented Michael Piller and amongst the new writers were the young and energetic Ira Steven Behr, Rene Echeverria and Ronald D. Moore, all of whom would go on to define Star Trek for many years to come. 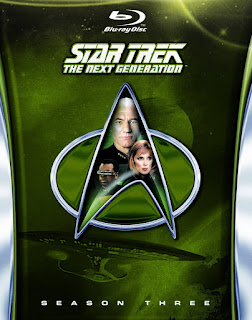 Because of these changes, Season 3 was produced in a state of chaos. Scripts were being completed mere days before filming, leaving little time for pre-production. This can be seen in the reduced amount of location filming this season, with almost no time to book location shoots ahead of filming. However, there's a noticeable improvement in special effects thanks to the introduction of new, smaller and easier-to-shoot filming models of both the Enterprise and the Romulan warbird (which makes several appearances). New, considerably more comfortable uniforms are also introduced, to the evident comfort and relief of the actors.

But what really makes the season work is the superior writing. Piller was keen to introduce more scenes of character interaction and development to the show. The guest cast are moved away from being the centre of the show, with their impact on the regular characters being more important. There's more continuity, with a recurring Romulan threat throughout the season (The Enemy, The Defector, Tin Man) and Worf's Klingon background being developed more thoroughly (Sins of the Father). Having been proven to be a sentient being in Season 2's excellent The Measure of a Man, Data's evolution continues through several episodes before peaking in The Offspring, where he tries to build a new android 'daughter'. Comedy is allowed freer reign, particularly in Deja Q, Captain's Holiday and Menage a Troi, which all feature a few good laughs (Deja Q may be the funniest episode the show ever did). 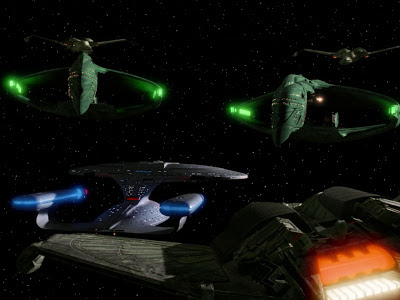 But the third season's strong reputation relies on its two absolute stand-out, inarguably, stone-cold classics. Yesterday's Enterprise is a time travel story involving parallel universes which remains fully comprehensible, features one of the best space battles the show ever did and finds an intelligent and non-cheesy way of bringing back Tasha Yar. The writing is strong, with lots of moments of subtlety (the alternate Riker and Picard don't get on) and some impressive production values and details, such as the revamping of the Enterprise bridge.

At the end of the season we also get The Best of Both Worlds, the show's first season cliffhanger and still the best one Star Trek's ever done. The return of the Borg, the outstanding music, the character interplay between Riker and newcomer Shelby, the effects and the doom-laden, hopeless atmosphere combine to make for one of the franchise's finest hours.

Conversely, there are only a few weak moments in the mix. The Price, The Vengeance Factor and The Most Toys are quite dull, whilst The High Ground is a commentary on the Northern Ireland Troubles which misfires completely due to the writers' poor understanding of that conflict. Who Watches the Watchers? sabotages a good premise and some excellent Enterprise scenes with some dull guest cast performances. But it's more surprising how good the show has become compared to the first two seasons, with even minor episodes like The Survivors and The Hunted coming to life and being enjoyable in a way the smaller stand-alones of the first two years struggled with. 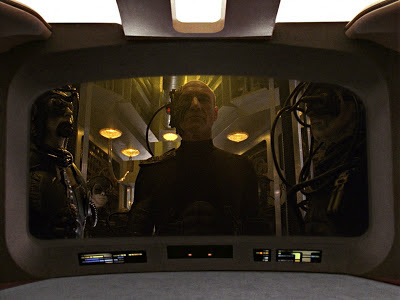 On a technical basis, the HD upscaling of the show is again amazing, with the same team that handled Season 1 doing the job. That means some more beautiful 3D planet renders, some outstanding effects recreations and superior reproductions of the show's colours (Season 3 is more colourful than the first two seasons). After the slightly disappointing Season 2 upgrade (the company responsible for that is not being re-used, interestingly), the S3 update is even more astonishing. For a season that was driven so much by writing changes, the extra features do a great job of focusing on the writing team and how they went about creating the best show possible and avoiding the mistakes of the first two years.

Ultimately, the third season of Star Trek: The Next Generation (*****) is outstanding. The writers, actors and crew are all on the top of their game, dragging the so-so show of the first two seasons up in quality to become something truly impressive. The season is available now in the UK and USA.
Posted by Adam Whitehead at 11:16

No mention of "Sarek"? But a pretty good overview of the significance and impact of the season, including a few surprising details. Although I'd argue that "The Most Toys" is far from dull. It's an excellent cerebral story that's more closely relevant to "The Measure of a Man" than "The Offspring," which is more like a rephrasing than a sequel.

Thanks for the background info on The Next Generation. I had no idea some of it was filmed while the studio was in chaos. The original Star Trek was an idea ahead of it's time. Special effects is only now catching up.

It wasn't that long ago that I finished rewatching all of TNG on Netflix, but every time one of your season reviews gets posted, I want the DVD sets even more, to see all the extras and learn more about what went on behind the scenes. Awesome run-down, and it definitely put me in the mood for more good sci-fi shows (shame Netflix in Canada doesn't have any other seasons of Star Trek to appease me).