Warner Brothers have acquired the movie rights to the Dungeons and Dragons roleplaying game and are developing a new, big-budget movie project. 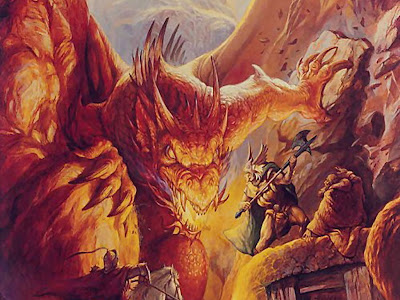 This will be the fifth D&D film, though only the second to get a theatrical release. Courtney Solomon directed a much-derided film, simply called Dungeons and Dragons, in 2000. Starring Jeremy Irons, the movie was a box office bomb. Two low-budget, direct-to-DVD and considerably worse sequels have followed, Wrath of the Dragon God (2005) and Book of Vile Darkness (2012). An animated straight-to-DVD movie, Dragonlance: Dragons of Autumn Twilight, was released in 2008 to indifference.

Solomon remains a producer on the new film, which will work from a script by Wrath of the Titans/Red Riding Hood scribe David Leslie Johnson. No director is on board yet, but Warner Brothers are apparently planning to expend a lot of effort on the film.

However, Warner Brothers are limited in what they can do. Most notably, the film rights are only for the D&D races and spells, effectively whatever is in the core rulebooks of the first three editions. The rights to the various world settings, such as Dragonlance, Forgotten Realms, Greyhawk and Dark Sun, remain with Wizards of the Coast and their parent company, Hasbro, as do the rights to the various popular novel lines and characters. It's been occasionally rumoured that Hasbro, enriched by the movie success of properties such as Transformers, has been looking at a movie series based on the popular Drizzt Do'Urden character and novels, but has not been able to come to a deal with the existing movie rights-holders (a Drizzt movie would require the use of the drow race, which is almost certainly part of the existing film rights, as well as core D&D spells and creatures). The previous Dragonlance animated film appears to have been possible only by not using core D&D spell names, but this would be a bigger stretch for other projects.

I have little hope for this movie project. Rather, Warner Brothers joining forces with Hasbro and developing a Drizzt film or a live-action Dragonlance project would be much more likely to have success. Those novels have actually considerably outsold the actual D&D game and would be much more likely to draw in a large, international fanbase than a simply generically-branded D&D movie would.
Posted by Adam Whitehead at 20:50

Email ThisBlogThis!Share to TwitterShare to FacebookShare to Pinterest
Labels: dungeons and dragons, news, this will probably suck but you never know

Despite all previous evidence pointing to the contrary, I'm hoping this ends up being good...I just got into Pathfinder (having encountered, but never actually played, D&D before), and have a bit of a tabletop buzz going on.

Think different fantasy RPG's could end up being the next Hollywood adaptation trend? There's been movement on the WoW movie recently, too...

It's just pathetic that everyone seems to treat D&D like a joke and any product made must be low quality. Why not treat a D&D movie the same way they treat Game of Thrones or the LOTR films? Give it the serious treatment and they could have a worthwhile franchise.

I remember seeing the first D&D movie in theatres. The only thing that really made it bearable was the sense of humour in my accompanying group of friends; their jokes were more entertaining than the movie itself, and I think without them around, my memory of the movie, if I had one at all, would have been of a lackluster movie that was trying too hard and sadly failing.

I kind of dread to see what's going to happen with this one...

Wraith of the dragon god was a good movie.it caught the essence of what is great about D&D.book of vile darkness,jerry lively did a great job with what little movie he had.judge it as you may but these 2 movies were pretty good,for what jerry had to wotk with.