How to Make a Successful D&D Movie

With Hasbro and Sweetpea Entertainment snarling at one another like two litigious displacer beasts, it's unlikely we'll be seeing a new D&D movie any time soon. As a result, it's fun to speculate what might happen if the legal arguments are cleared up and someone is able to make a film, hopefully with also the rights to use the franchise's vast number of novels and characters as source material. The way I see it, there are three viable options: 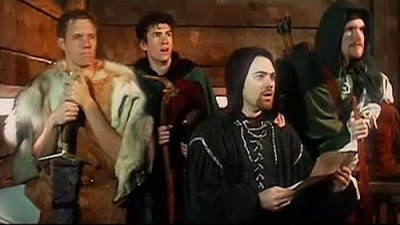 
In this idea, the film takes place from two different perspectives. In the first, we follow a group of real-life D&D players. They're in the here and now and meet up once or twice a week to play the game. When they're playing, rather that us just watching some people sit around a table, instead we slip into the D&D game itself. The same actors are now playing the players' characters, swinging swords, firing lightning bolts and pausing in mid-action for fifteen minutes whilst someone tries to perform a grapple check. There are a lot of effects. It's all kind of awesome, except it's interspersed with scenes of the players playing around the table. You could show how random out-of-game decisions are portrayed in the game world. This could include the classic dodge of one character dying, so the player creates a new character who bumps into the old adventuring party, usually somewhere incongruous like the middle of a vast desert or ruined temple, and is immediately accepted into their ranks with no questions.

Of course, this is such a good idea that it's already been done several times, most notably in Dead Gentlemen Productions' very fine Gamers trilogy of fan films (the first movie even has the unconvincing replacement character scene). My preference would be to remake one of them and give Dead Gentlemen a truckload of cash for the pleasure.

Also, for added geek-cred, you could cast well-known real D&D players in the film, like Wil Wheaton, Felicia Day and of course Vin Diesel. How about Diesel as the DM? Who'd ever argue with a decision? In addition, with this sort of project you can make it as high or as low-budget as you like, and vary the tone from comedy to drama and back again. Most importantly, it is true to the D&D experience in a way just a generic fantasy movie isn't. 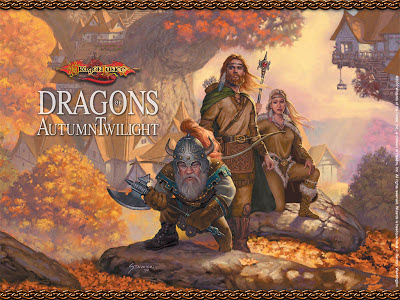 Actually, this has already been done but few people ever saw it. Mainly because it was a bit rubbish (though still the best D&D movie made to date), but also the fact it was animated put a lot of people off. Still, as far as 'classic D&D narratives' go, this is the most obvious to go for. It has built-in franchise appeal (the core Dragonlance mythos consists of two trilogies of novels, with a multitude of spin-off books and a later series of less well-received sequels), some fairly iconic characters and some spectacular action set pieces. These include massive aerial battles featuring dragons, dungeon adventuring, storming an ice castle and spooky encounters in haunted forests. It pretty much encapsulates a lot of the traditional D&D tropes into one story.

There are of course two problems. The first is the budget, which would need to be 'large', to put it mildly. The second is that Dragons of Autumn Twilight is only the first third of a longer story, not a self-contained story in its own right. If the movie bombs, it'll be left on an annoying cliffhanger. The scale and budget means it's more of a project you build up to rather than lead with straight out of the gate. And that neatly leads to my third and final choice: 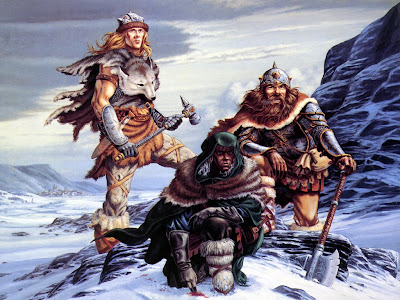 Originally published in 1988, The Crystal Shard, a novel set in the Forgotten Realms world, has become one of the best-known and most iconic D&D novels. It introduced the world to the character of Drizzt Do'Urden, a drow (or dark elf) ranger. Unlike most of the rest of his species, which was cursed and evil, Drizzt was noble and honourable, seeking to live in peace away from his evil kin. And kick ridiculous amounts of arse. Whilst later Drizzt books can be charitably described as 'formulaic', the early books were (relatively speaking here) fairly engaging action-adventure stories. Drizzt was a (very much speaking relatively here) complex character and author R.A. Salvatore gave him a lot of character stuff to work through, including parenting issues, the problems of racism and how to make friends with people when you're going to outlive them by centuries.

In addition to that, The Crystal Shard has the benefit of being an ensemble (Drizzt is just one of a team, unlike later books in which he becomes the dominant hero) and also of being self-contained: it was later retconned as Book 1 of The Icewind Dale Trilogy, but its own narrative ends in the first instalment, with a simple segue into further adventures at the end. Whilst there are also major effects moments (a battle with an ice dragon in its lair; the people of Ten Towns fighting off a monster assault; a duel between Drizzt and a demon), it also wouldn't be quite as expensive as a Dragonlance movie.

More to the point from a commercial viewpoint, R.A. Salvatore has sold more than 15 million novels in the USA alone (which indicates worldwide sales likely double that, if not more). Far more Salvatore novels have been shifted than D&D rulebooks, and Drizzt and Forgotten Realms are better-known brands than D&D itself. If Hasbro want to maximise their potential revenue, this is definitely the course to pursue. I wouldn't bet on it being a good movie unless they get a particularly talented director and scriptwriter, but it would have commercial clout. And of course, they already have the perfect actor ready to play Drizzt: 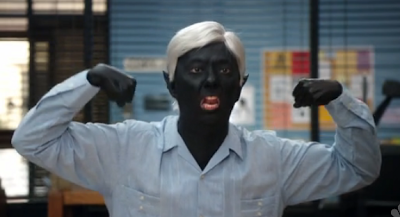 It'll be interesting to see how this all pans out after the litigation is over, and what sort of film we get.
Posted by Adam Whitehead at 11:52

All would have a good chance of working with #1 being my top choice (followed by #3, then #2).

The meta approach would be best for incorporating some of the odd "rules" of D&D (clerics not being allowed to use edge weapons, human wizards not being able to wear armor but elvish magic user/fighters can and use all weapons as well, spells being used once a day, etc).

The first option scares the hell out of, but probably because I'm still haunted by the garbage that was Mazes and Monsters.

I'd love to see a proper film version of the Dragonlance Chronicles, but the budget would insane, and stunt casting would likely be needed to generate enough mass appeal to earn back the budget.

I'd just go with the low-budget, occasionally hilarious European-shot D&D movies, if it's all the same to you.

I want Lux the Barbarian to fight Lady Metalface (I never worked out her name) from the third film. Oh, and that guy who pulled his eye out and sent it scouting, too.

I have only read the first 6 Drizzt books, but I thought they were really good for what they are.

You got at this a little at the end of your post, but the main thing going against option #1 is that it would almost certainly compare unfavorably against the Community episode that is more or less the same thing (minus special effects).

I think the Dragonlance Chronicles would make the better films although I can see your point about budget and the need for it to be a trilogy.

Mazes and Monsters did suck, but the NBC Community dungeons and dragons episode worked really well (despite obvious limitations and lack of depth due to the show's 22 minute running time).

The COMMUNITY episode was great, but it was also quite short. Also, not many people watched it (COMMUNITY has a way higher profile than its audience figures has ever suggested) and a film would be able to get into the material in more depth. THE GAMERS 2, for example, isn't far off that episode of COMMUNITY in quality and humour, held back only a little by the more inexperienced actors.

I've been waiting for a proper Dragonlance Chronicles trilogy forever. It reads like a screenplay. It has incredible set pieces, very well drawn characters (that would translate to well to screen), a great plot (in blockbuster movie terms). Adapting it would be pretty straight forward. But the special effects, costumes, makeup and production design would have to be on point. Hell, the tons of brilliant official paintings and art already serves as perfect costume, character, production design.

There's also the option of using essentially the same premise as the 80s cartoon series, a bunch of players get sucked into a gameworld. I like this option because it reflects the source material and the whole "meta" aspect but it can be taken more seriously.