1877. The camp of Deadwood in the Black Hills is gaining respectability as the gold rush continues. It has a mayor and a sheriff, and the neighbouring territory of Dakota is expressing interest in annexing the nascent town. 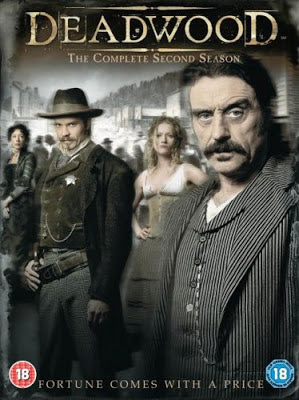 The second season of Deadwood is a partially successful extension of the themes of the first season. Order has arisen out of chaos, a new government and law for the town has been formed and people are starting to organise themselves. Deadwood is still a dangerous place - life remains cheap for many - but civilisation is coming. Against this backdrop Al Swearengen is still running shady deals but he has now become involved in political intrigue as he tries to get the best deal possible for the town. Sheriff Seth Bullock's interest in law and order is put aside as he tries to get to know the family he has inherited from his brother, whilst Joanie Stubbs's attempts to go solo and open her own whorehouse end in tragedy. There's a wider variety of storylines and characters in the second season, but they don't cohere as perfectly as they did in the first.

The core problem is the essentiality of Ian McShane's presence as Al Swearengen to the success of the show. A curious decision was made to spend about three episodes on Swearengen being indisposed on account of kidney stones, meaning that for a quarter of the season its main protag/antagonist is all but absent, only appearing to pee some blood on the floor. Interesting for its attention to period detail (medicine in the 1870s was terrifyingly primitive), but hardly dramatically compelling. In McShane's absence, some of the thinness of the other character arcs becomes more apparent. Alma Garrett spends a dozen episodes sitting in her rooms not doing very much. Seth Bullock spends most of the season agonising over what to do about his relationship with his inherited wife and stepson (to the point of completely missing a prostitute-murdering killer being loose in the town). It's notable that the second season of Deadwood springs back to life when Swearengen returns to the front line, influencing an important part of history (Deadwood's acceptance into the USA and what territory it will join) from behind his office desk, negotiating deals with hugely important businessmen George Hearst and sorting out an internecine conflict within the Chinese community. Most of HBO's other classic shows succeed with broad ensemble casts, with no central role to hang the storyline on (The Wire, for example, had an entire year in which Dominic West's McNulty barely appeared and it was arguably the best season), but Deadwood falters in Swearengen's absence.

That said, even a slightly disappointing season of Deadwood remains great television. As with the first season, the writing, characterisation and attention to detail are all superb. The dialogue is often a joy to listen to, and the show's morbid sense of humour results in laugh-out-loud moments. Alma's indecision over her future prospects is presented sympathetically, but with a true-to-the-period emphasis on realism over sentimentality. Bullock goes through a similar process. Both storylines are drawn out much too long, but are nevertheless explored well. More successful is the way the show presents Cy Tolliver as a man with the veneer of civilisation and decency, but with a seething, frustrated anger not far below the surface.

The second season of Deadwood (****) remains compelling viewing, but definitely falters compared to the first year. The pacing feels sluggish at times and the back-room dealings over the camp's future feels like set-up more than the main course. The writing and performances remain exemplary and the thematic developments are fascinating, which help make up for the shortcomings. The series is available now in the UK (DVD only, so far) and USA (DVD, Blu-Ray).
Posted by Adam Whitehead at 12:36

Deadwood season 1 was just stunning. Some of the best writing I've seen on TV, combined with great acting.

Season 2 was not as good, but I'd still rate it above most of the competition. I really loved this series - gutted that they canned it,

diminishing returns season after season, but it was still one the best shows on TV at the time