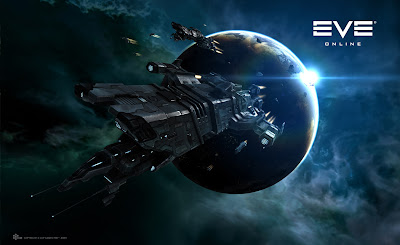 Launched on 6 May 2003, EVE Online was an attempt to bring the spaceflight, trading and combat of games such as Elite to the online multiplayer arena. Set more then 20,000 years in the future, the game's premise is that a large number of human colonists went through an unstable wormhole - made usable by a massive jumpgate called 'EVE' - and settled the New Eden galaxy. The wormhole later collapsed, making a return to Earth impossible. The colonists spread out across more than 7,500 star systems in this new galaxy. Players create a character belonging to one of four nations: the Amarr Empire, Caldari State, Gallente Federation and Minmatar Republic. Players can then undertake missions ranging from asteroid mining and bounty hunting to striking out on their own or joining one of the Corporations, massive organisations (some with tens of thousands of members) whose members work together for their mutual gain.

EVE, the creation of Icelandic developers CCP, is notable in that relatively little of its narrative is created by the game developers. Instead, the history of EVE's alliances, corporations, wars and economy is written directly by the players themselves. Stories abound of corporations alerting their members to an impending space battle by smart phone messages, resulting in massive engagements with thousands of ships on each side. The players of the game direct much of the shape and direction of the game, and elected representatives of the players meet with CCP several times a year to discuss the game's future direction. EVE is also notable for its relative generosity: all of the game's expansion packs (of which there have been eighteen to date, with a nineteenth due next month) are available to subscribers for free, and everyone's copy of the game is automatically updated to the latest version. Unlike games like World of WarCraft, which divide its players into separate shards or servers, EVE Online has just one server for the entire world (with the exception of Chinese players, who, at the request of the Chinese government, have to play on their own server), meaning you can always find your friends and other people to play with.

The game has a reputation for being hard to get into, and certainly during the year I played the game (2006-07) it had a learning curve that was more of a wall. Since then there have been refinements to the UI (user interface) and the addition of more tutorials to make joining up easier. The game is fiendishly addictive (I made the decision to remove it and not play it again, otherwise I wouldn't be doing anything else) and is truly remarkable for the way it has evolved and transformed over the last decade as a collaborative effort between the developers and players. With periodic all-encompassing updates to the graphic engine to keep it looking amazing, there's no real need for CCP to ever develop a sequel. They have, however, developed a first-person shooter spin-off, the free-to-play Dust 514 for the PlayStation 3, and are currently considering developing a twitch-based space combat game set in the EVE universe. There is even talk of an EVE Online TV series, which will be inspired by player-driven events in the game.

EVE Online is easily the most interesting MMORPG ever released for its emphasis on the player driving the action of the game, and it's surprising more MMORPGs haven't followed this route. Congratulations to CCP and their fans, and it'll be interesting to see what the next ten years brings to the game.
Posted by Adam Whitehead at 09:04