The Sandman: The Wake by Neil Gaiman

One of the Endless has fallen, so there must be a wake. As the millions whose lives they touched gather to remember the fallen, a new Endless must arise to take their place.

Note: normally I try to stay spoiler-free in reviews (even if the book has been out for seventeen years). However, it's simply impossible to discuss this collection without spoiling the biggest plot twist in the entire Sandman series, so be forewarned before continuing. 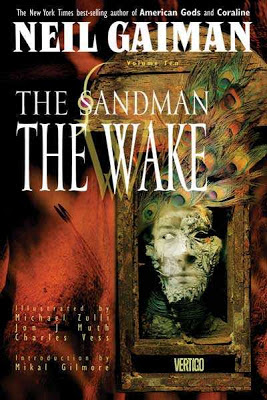 The Wake is the tenth and concluding graphic novel in the Sandman sequence. It is an extended coda to the main narrative of the series, which climaxed in the preceding book, The Kindly Ones. As such the story is about wrapping up (or at least addressing) loose ends, revisiting some old characters and paying off some old debts. There's no real threat or tension in the narrative, just a loosening of the pace that allows Gaiman to quietly (but still effectively) develop and round off character arcs and leave the series with grace.

The first three parts of The Wake form a single narrative. A wake is held for Morpheus (who died at the end of The Kindly Ones) and beings from across the universe arrive to take part. There are numerous cameos from familiar characters (including brief ones from Superman and Batman, since Sandman is part of the DC Universe) and Daniel, the 'new' Dream, frets about his new role as he rebuilds the Dreaming. There is some tension to be mined from Daniel's meeting with Lyta Hall (who was arguably responsible for Dream's death) and from Matthew's decision to remain in the Dreaming or not, but mainly the emphasis here is on the loss and how it effects the other characters in the series. Wisely, after setting it up as a big event, Gaiman chooses not to show us the first meeting between Daniel and the rest of the Endless (in some parallel universe where Gaiman cashed in and sold out, we can imagine that scene as the opening of The Sandman II).

The latter three parts are more diverse. In the first, Hob Gadling attends a terrible American Renaissance Faire. Gadling is six hundred years old, the result of a bargain between Dream and Death, and is horrified at the romanticising of the England of his youth, a place of plague and death where life was cheap. Gadling, who is now dating an African American woman, is also wracked by guilt over the spell of his life he spent dealing in slaves. Ultimately Gadling is offered the chance by Death to end the bargain and die, since the other partner in the bargain is also dead.

Gadling has always been one of the more interesting characters in the Sandman series, appearing intermittently since the early issues and providing Dream with arguably the only true friend he has. This story sees Gadling severing his ties with the dead Dream and moving on with his life in a touching and human way.

In the penultimate part of the series, Gaiman cheekily takes a big risk ("What are they going to do? Stop buying it with one more issue to go?") by having a story told mostly in text, in which a Chinese government minister from a thousand years ago is exiled into the desert and inadvertently passes through a 'soft place' into the edge of the Dreaming, where he meets both Morpheus and Daniel at different parts of their existence. It's a bizarre and existential story which is intriguing and amusing (especially with the cameo from a cat).

In the final part, we suddenly reverse back to the early 17th Century. William Shakespeare has decided to end his writing career, but has to fulfil a promise: the second of two plays commissioned by Dream. As he labours on the work - a play called The Tempest - Shakespeare reviews his life, considers his legacy and muses on the choices he did not make. He wonders if a person can every truly change, and of course this what the entire series was about: Dream coming back from his captivity a changed being, but in the end not able to change enough, resulting in his destruction.

The Wake (****½) is not a blood-and-thunder grand finale, but instead it's an effective analysis and wrapping-up of what has come before. There are perhaps minor signs of the author overdoing it (dedicating three issues to a funeral and wake might be seen as over-indulgence), but for the most part Gaiman restrains the sentimentality in favour of an attempt to finding meaning in life and death and the choices that are made. The collection is available now in the UK and USA, and as part of The Absolute Sandman, Volume IV (UK, USA).
Posted by Adam Whitehead at 13:16

Email ThisBlogThis!Share to TwitterShare to FacebookShare to Pinterest
Labels: neil gaiman, the sandman, the wake