The Art of War by David Wingrove

Summer, 2206. The great war is winding down. The Dispersionists, those citizens of the great world-girdling city of Chung Kuo who have argued in favour of change and technological advancement, have been defeated by the forces of the T'ang, the Seven, the guardians of stasis and the status quo. All that remains is for the T'ang to distribute the wealth they stole from their foes and return to ruling the world in peace. But things have changed too much for that. DeVore, most infamous of the Dispersionists, remains at large and now plots to restart the war with the help of some new allies. 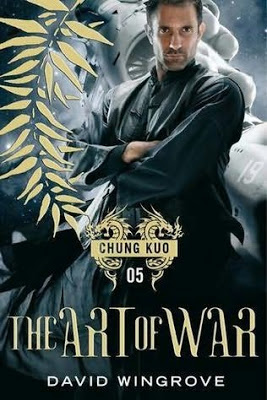 The Art of War is the fifth volume in this recasting of David Wingrove's epic Chung Kuo series. It opens five years after the events of Ice and Fire. Those hoping to see the War of Two Directions (or, more accurately, its opening moves) in all its glory will be disappointed as Wingrove skips most of the conflict to concentrate on the aftermath and the attempts by Howard DeVore to keep the struggle going through other means. The Art of War disdains the sprawling morass of plots of the previous couple of volumes in favour of a tighter focus on DeVore's plans, the machinations of the redoubtable Hans Ebert and the development of Ben Shepherd as he tries to realise his destiny. A few other chapters concentrate in short bursts on other characters as they get into position for the next stage of the conflict, most notably on the T'ang themselves. Several of the T'ang have fallen and their replacements may not quite have the same respect for precedent, honour and tradition their forebears possessed.

The Art of War is nicely paced and opens with an effective series of chapters catching us up with what the major characters have been up to. For those comparing the new version of the series with the original, The Art of War makes up the first third or so of the original second volume, The Broken Wheel. This has the advantage of easing us in (relatively) gently to a new era in the history of Chung Kuo, but has the major problem that the book just stops in mid-flow rather than climaxing (unless you count the fact that the book ends with a rather inexplicable incestuous sex scene). Lots of pieces are put on the table in this volume, lots of characters start getting into position to do things, but it's mostly all set-up and no pay-off (though we do get a couple of effective action sequences along the way). Most of these plotlines should evolve through the next two volumes An Inch of Ashes and The Broken Wheel, but it's still somewhat frustrating for those reading along this series as it is released.

On the plus side, more of Wingrove's vision is unveiled here as DeVore's plans become a bit more apparent and Ben Shepherd begins the construction of the Shell, a device that will revolutionise the idea of entertainment in Chung Kuo. Wingrove's prose also improves noticeably in various dream sequences, where his writing takes a more poetic quality than the straightforward, prosaic writing used elsewhere.

The Art of War (****) is a very solid instalment in this ongoing (and lengthy) series. The book is available now in the UK and via the Book Depository in the USA. American branches of Barnes and Nobel are also beginning to stock the UK editions of the series. The sixth volume, An Inch of Ashes, will be published on 4 July.
Posted by Adam Whitehead at 18:56