After breaking the Prime Directive in order to save the life of a crewmember, Captain James T. Kirk is recalled to Earth and is removed from command of the Enterprise. When a rogue Starfleet agent named John Harrison carries out a devastating pair of terrorist attacks on Earth, Kirk is reinstated and given orders to track down and eliminate Harrison. This involves a dangerous journey into the heart of Klingon space...and into secrets that some in the Federation want kept hidden. 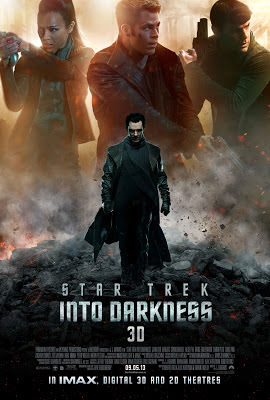 Star Trek Hyphen Into Darkness (not colon, apparently) is the sequel to J.J. Abrams's 2009 reboot of the venerable SF franchise, which is quickly closing in on its fiftieth anniversary. It picks up shortly after where the previous film left off, with a new timeline established in which the crew of the Enterprise have just started working together and need to confront a new threat to the Federation, this time in the form of a canny and intelligent Starfleet officer who knows them better than they know themselves. This enemy is played by Benedict Cumberbatch, who brings presence, menace and brooding intensity to every scene he's in, even when he's given some distinctly ropey dialogue to work with. Cumberbatch rises above the limitations of the script to deliver a great performance, bringing a sense of danger to the film that Eric Bana's Nero never really achieved in the previous film.

The rest of the casting is pretty much excellent. The Enterprise crew were well-established in the previous movie, though I had niggles over Chris Pine as the young Kirk, who brought the Shatner-requisite bluff arrogance but little of his charm or sense of vulnerability in the face of his own overconfidence. Whilst that remains an issue, Pine's performance is much-improved and some of that vulnerability does come out. The other actor whom I thought didn't quite gel was Simon Pegg as Scotty, who didn't really come across as Scotty but as Simon Pegg doing a bad Scottish accent. This time around, the writing is stronger for Scotty and he gets a decent arc through the film. It's also good to see everyone having their moment in the sun: whilst the emphasis remains strongly on Pine and Zachary Quinto's Spock, we also get solid (if somewhat brief) subplots for Sulu, Uhura and Chekhov. Bruce Greenwood also returns as Captain Pike, bringing a formidable sense of gravitas and charisma to his role, whilst Peter 'RoboCop' Weller does a good turn as Admiral Marcus. Less well-served is Alice Eve as Carol Marcus, who is given little to do other than a gratuitous strip-tease scene.

So, great cast, what about the plot? It could be better. Some ideas are great, such as bringing Deep Space Nine mainstays Section 31 into the Abramsverse. Seeing more of 23rd Century Earth is cool, and we get a little bit of a feeling for how normal people live and work in this world, which adds a little bit of texture and depth to the setting. Beyond that, the film is just as rammed full of plot holes (the crew spend a ludicrous amount of time and trouble trying to secure a resource in the finale when they have seventy-two alternate sources of it sitting right next to them on the ship), technobabble and predictable plot twists as its predecessor, though it at least makes an attempt (although a rather clumsy and over-obvious one) at doing some decent foreshadowing this time around. Where Abrams sticks to action, explosions and fights, he does well, as he does with cheesy humour. Attempts at characterisation are variable, and emotion is a bit over-wrought.

Where the film falls not so much flat on its face but screaming plummeting off a cliff is its final fifteen to twenty minutes. For a film set in a rebooted continuity, promising a fresh take on the franchise and the exploration of new ideas, the movie is obsessed and indeed bogged down with paying homages to one of the original Star Trek films. Dialogue and character beats, including wholesale lifting of dialogue and even scenes, are taken from that older film to the point where you begin to wonder why they didn't simply remake the movie wholesale. The reboot becomes a pastiche, reaching farcical levels when a powerful character and emotional moment from the older film is inverted and then undone seconds later by a howlingly awful plot device.

Where Into Darkness truly stumbles is that it does not understand you have to earn your miracles. Having a miracle solve a problem is fine, as long as it has consequences and a price. In the original third Star Trek film, Kirk pulled off a miracle that was highly implausible, but it was sold because the price he paid - in the life of his son, the loss of his ship and the (albeit temporary) end of his career - was high and the consequences real. Into Darkness has a fortune-reversing twist in its ending but because we've spent very little time with this crew (as compared to the better part of two decades at the time of the original films) it does not resonate. Its resolution is cheap and easy, unearned and without apparent consequence: a sequence in which thousands if not tens of thousands of people must have died is shrugged off in a high-fiving, triumphant final scene.

Star Trek - Into Darkness (***) has early promise but its ending is disposable, fast-food storytelling, unworthy of its excellent cast. The deeply unsatisfying ending squanders the promise of some solid early action scenes and even a few effective scenes of character development which are superior to anything in the first film. Indeed, with a different set of final scenes (and much less riffing off of a far superior movie), Into Darkness would have effortlessly surpassed its forebear. Instead, the problems way it down just as much. Into Darkness remains visually impressive, fast-paced and, if you can switch your brain off, fun. But it's also derivative, unsatisfying and apparently terrified of doing anything new, which is a very odd position for a movie set in a new, unrestrained and exciting continuity to be in. The film is on general release in most countries now.
Posted by Adam Whitehead at 23:56

Thanks for the review. Sounds like more of the same to me.

The first reboot film was OK, but it was essentially an action film set in the Star Trek universe. I'd much rather see a science fiction story with some good action scenes than an action movie with the facade of science fiction.

ALL mainstream hollywood films are going this way. I think I first noticed it with the last Indiana Jones, and I think it is a formula hollywood is consciously working to.

Frenetic action. Very short dialogues. Brief moments of saccharin emotional pathos arriving without any preamble. Plots resolved by heroic efforts in "pulling that lever" or stretching an arm a really long way to "push that button". LOTS of effects.

I think hollywood must have a word for this formula. Basically they're aiming at a younger and (put politely) a less well educated audience.

Having said all that, I enjoyed Into Darkness a lot, but if you want to see an intelligent film these days you have to find an art house cinema.

good review - sadly it confirms all my suspicious having thought that the first was awful if you take away all the pretty and shiny effects.

Goog review. The problem is that Hollywood is selling to a world box office...not just an Anglo-American one...so, no complicated plots or dialog but lots of noise and big booms. This is why Americans no have to turn to cable tv, or British imports for good stories.