The first half of the third season of Game of Thrones - adapting the first chunk of the novel A Storm of Swords - is a major improvement on the second season. Last year, the need to compress the massive Clash of Kings into just ten episodes, bringing in many new characters, locations and storylines whilst servicing the existing characters (and in some cases, such as with Daenerys, Robb and Jon, bringing in lots of new material to make up for their lack of material in the book), resulted in a season that was disjointed, muddied and with pacing that was all over the place. Whilst individual scenes were well-written and well-acted, the show as a whole suffered (apart from the final two episodes, particularly Blackwater, which were excellent). 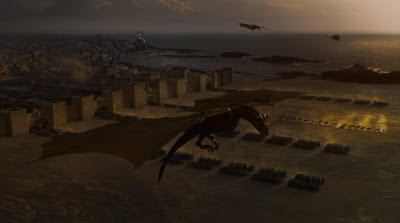 With Season 3, the producers have ten episodes to adapt a lot less material from a book (A Storm of Swords has been split over the third and fourth seasons), meaning that we get more of a strong focus on storylines and on characters. Thematic elements, which fell by the wayside in the crammed second season, have been allowed to re-emerge. Changes to the story feel a bit more natural and organic this year, and overall the series has regained some of the strengths of the first season. It's also benefited from the confidence installed by the popular success of the second season, particularly the much more ambitious and frequent use of CGI to flesh out the world. The success of the third season (so far) is all the more notable because they've had to bring in a lot of new characters, such as Olenna Tyrell, Thoros of Myr and the Reeds, and integrate them into the already-packed storyline.

It hasn't been completely plain sailing, of course. In particular, the third season cops some flak from the mistakes of the second. By reducing the complexity of the military movements of Robb, Tywin and Edmure's armies in the second season, the producers removed much of the motivations for Edmure Tully's actions in the third (not to mention the producers are now paying for not introducing the Blackfish and Edmure in the first season; the people I watch the show with who are not book-readers were pretty much lost by this development). Thus the show needs to back up and unconvincingly retcon the military actions of House Tully from last season. In addition, the writers have rather badly messed up the clarity of the storylines relating to House Frey and House Karstark, resulting in the entire Robb/Catelyn side of the story descending into a mess (and Michelle Fairley is a superb actress, but her constant state of grief for numerous episodes in a row is a little wearying).

Elsewhere, the storyline perks up considerably. In Astapor Daenerys takes charge of her own destiny and Emilia Clarke's acting takes a major step up from her wheel-spinning arc in the second season. The re-addition of Ian McElhinney to the cast as Ser Barristan Selmy is also a major plus, creating an interesting dynamic with Iain Glen's Ser Jorah Mormont that both actors spark off with aplomb. Even the dragons have more to do, and Nathalie Emmanuel's Missandei appears to be a solid replacement for the ill-advised dispatch of Irri at the end of the second season. The translation scenes (where the slave-masters of Astapor insult Daenerys without being aware she can speak their language) bring an element of black humour to the story which is appreciated at this stage. 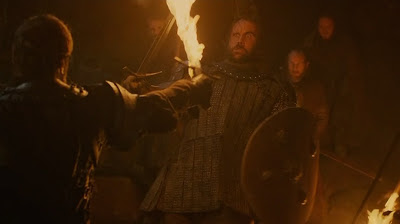 The Brotherhood Without Banners part of the story has also lived up to its billing, particularly with the superb casting of Paul Kaye as Thoros of Myr (one of those left-field choices that has worked out brilliantly) and Richard Dormer's able performance as Ser Beric Dondarrion. The sequences in King's Landing are as watchable as ever, and are even taken up a notch by the arrival of Dame Diana Rigg as Olenna Tyrell, the Queen of Thorns. Rigg's performance is awesome, combining intelligence with a dangerous cunning, and she lifts every scene she is in. The Dragonstone scenes are also good, with Stephen Dillane making even the defeated Stannis seem sympathetic, especially once we get to see his disturbing home life (fleshed out by an excellent turn from Tara Fitzgerald as the demented Selyse and a charming performance from Kerry Ingram as their disfigured daughter, Shireen).

The scenes beyond the Wall are a little lacking, however. Ciaran Hinds makes for a great Mance Rayder, but the character is lacking some of the nuance from the novels. Mackenzie Crook has so far been under-utilised as Orell and Kristofer Hivju is one of those casting ideas which looks awesome in theory but hasn't quite worked out in practice yet (though it's still early days for him). Speaking of which, the master of 'good on paper but lacking in practice' remains Aidan Gillen's stilted and uncomfortable performance as Littlefinger. Given Gillen's evident acting talents from other projects, the blame for this can perhaps be placed on the writing (TV Littlefinger is a considerably less complex and far more obviously villainous character than in the novels). However, Gillen's decision to adopt a Christian Bale, Batman-style grow for his voice is presumably his own and adds an unwelcome element in incomprehensible surreality to what is already the show's Achilles' heel.

Despite these issues, the show as a whole has definitely rediscovered some form this season, benefiting from a tighter focus on characters and storylines and less sprawl (or, rather, less sprawl-per-episode). This season has already given us one of the very best episodes of the series so far with And Now His Watch is Ended, in which the pacing is excellent, the action beats are measured and the performances are stunning. The following episode is almost as good, and with Nikolaj Coster-Waldau's angry confession of why he really killed the Mad King, the show may have found its best-acted single scene to date.

Note: there will be an extra one-week break between episodes eight and nine to accommodate the Memorial Weekend holiday in the United States (last year the show took a major ratings hit from it, so HBO is skipping it this year).
Posted by Adam Whitehead at 13:46

Email ThisBlogThis!Share to TwitterShare to FacebookShare to Pinterest
Labels: a game of thrones (TV series), a song of ice and fire, a storm of swords, bryan cogman, d.b. weiss, david benioff, game of thrones tv, hbo

Season 3 has absolutely been fantastic so far, but then the source material is stronger in the third book than the second. The true test of the series will come when they begin adapting books four and five, where the pace slowed and the novels grew significantly more introspective.

That said, I am frankly shocked by your assessment of Aiden Gillen's Littlefinger. I watch the show every week with a selection of book-readers and non-readers, and Littlefinger and Varys (particularly in scenes together) draw more praise than almost anything else from everyone watching. Very interesting to see you so down on his performance. I, for one, am most disappointed by Kit Harington. His character has lacked any real agency that he had in the books, and comes off much whinier than I remember.

I pretty much agree with every single thing you mentioned... The scene with Jamie and his explanation of killing the Mad King was amazing, and was the best acted scene so far. I still think Varys is excellent and his scene with Tyrion explaining his mutilation was also phenominaly acted.

So far I think Thoros has been the best addition to the show. He reminds me of an alcoholic Robin Hood which is pretty cool. My wife's favorite scenes have centered around Margaery Tyrell and her schemes involving Sansa. All in all a great season! I'm surprised you didn't menton the Theon story arc!

Completely agree about Aiden Gillen! I thought he was quite good in season 1, but his bizarre change in voice to some sort of Irish-Scottish-English hybrid accent is distracting. Not to mention his stilted delivery. The scene this season at the Small Council chamber with Charles Dance really highlighted Gillen's poor acting.

I really can't fathom why - he was superb in The Wire.