Cordelia Naismith, commander of a survery ship from Beta Colony, is marooned on an uncharted planet when her vessel is attacked by Barryarans. Naismith is captured by Captain Aral Vorkosigan, the infamous Butcher of Komarr, and taken on a gruelling cross-country journey to his base camp. However, Vorkosigan himself is facing a prospective mutiny led by an ambitious junior officer and both Beta and Barrayar are about to find themselves on opposing sides of a bloody war. 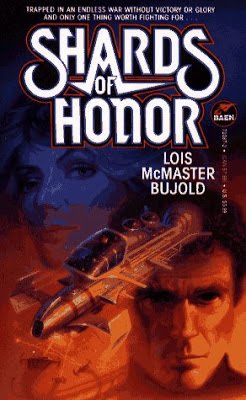 The Vorkosigan Saga is one of the most famous ongoing works of science fiction in the United States. Comprising (so far) fifteen novels and numerous short stories and novellas, the series has won four Hugos (including three for Best Novel), been nominated for another six and has won an additional two Locus Awards and two Nebulas. The series has sold more than two million copies for Baen Books in the States, but is almost unknown in the UK. Repeated attempts to publish the series here have failed, usually due to low sales and indifferent reviews.

Reading Shards of Honour, I have to reluctantly adopt the traditional British stance of not seeing what all the fuss is about. The book starts off well enough, with an adventure storyline featuring two people (and a severely injured third) abandoned on a planet and having to work together to survive. These sequences, though indifferently written, are interesting enough and Bujold reveals an interesting amount of character through the actions of Cordelia and Aral. Unfortunately, what she doesn't do is provide them with any chemistry. When Cordelia realises she is attracted to Aral, and Aral reciprocates those feelings, it kind of comes out of nowhere. When (spoiler alert!) they are eventually rescued, the book descends into a montage of Cordelia being captured, released, re-captured, escaping, being almost-raped (the lazy go-to jeopardy trope for any female character in peril, naturally) and so on for a good hundred pages or so. Due to the stodgy prose, mechanical dialogue and somewhat stilted character reactions, none of this is particularly exciting.

Things perk up a little bit towards the end, with the revelations of the extent of a supporting character's psychological trauma and a subplot about a bunch of unborn babies in exowombs (the result of war rapes) having to be forcibly supported by the fathers who conceived them both being intriguing, but these are very minor elements that arrive rather late in the day.

Shards of Honour (**) has moments of interest, but overall is stodgily-written and unconvincingly-characterised. Still, it's a first novel and not one of the most well-regarded in the series, so I will press on with the (chronologically) second novel in the series and one of the most critically-acclaimed, Barrayar. Shards of Honour is available now as the past of the Cordelia's Honour omnibus (UK, USA).
Posted by Adam Whitehead at 08:58

Have you read any of Bujold's fantasy? The Curse of Chalion and its sequel/spin-off Paladin of Souls are among the best things I've read.

I hope you keep reading the series. It becomes more complex and interesting with each volume.

Seriously, stick with it. Once Miles becomes the focus of the series (book 3), it becomes amazing. I wasn't crazy about the first book, but Barrayar is an exponential increase in quality.

Oh, this series just erupts after this, and all lot of the awesomeness that is 'Barrayar' (the second book, not the planet) is seeded here.

You simply must keep up with it. You haven't even met the stars of the show yet! Let's talk when you get to the 'Warrior's Apprentice'

Looking forward to the review of Barrayar. I've recently struggled a long with this series, the later volumes are better but I still feel the series is seriously overrated.