Lucasfilm have announced a new Star Wars CGI TV series is being made, entitled Star Wars: Rebels. This series will be set between Revenge of the Sith and A New Hope and will be heavily influenced by Ralph McQuarrie's concept art for the original trilogy of movies. 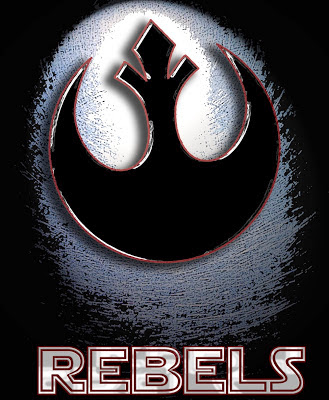 Not from the TV series, but a logo from some upcoming novels.

The production team is a mixture of veterans of Star Wars: The Clone Wars, other animated projects and some people involved in Episode VII and the other new live-action films.

The setting is telling since Lucasfilm and Disney had previously indicated that all new Star Wars media going forwards would be set in the Episode VII time period, but clearly that's no longer the case. This may renew hopes that the abandoned LucasArts game 1313 might yet be salvaged, and Obsidian's planned new Star Wars RPG might also be in with a shot of getting made. Most interesting is the fact that Rebels seems to be set in the same time period as George Lucas's planned Star Wars live-action TV series, only with more of a rumoured emphasis on the Rebel Alliance rather than on bounty-hunters. Whether this means that Rebels replaces the planned live-action show, or if that will still reach the screen later on, is also unclear.

Star Wars: Rebels will debut in the autumn of 2014 with an hour-long special on the Disney Channel.
Posted by Adam Whitehead at 16:23

The Clone Wars started kinda iffi, but it became very fast an extreemely strong show, hopefully Rebels will be just as good.