An archaeological expedition is searching for the legendary kingdom of Yamatai, believed to be located in a hazardous, storm-wracked area near Japan. The expedition is shipwrecked on an uncharted island and attacked by hostile other castaways, who seem to be part of a cult following a maddened priest. When several members of the expedition are kidnapped it falls to the youngest and most inexperienced member - one Lara Croft - to rise to the challenge, save her friends and find a way of getting off the island. 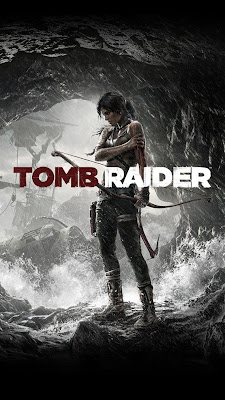 Tomb Raider is a fresh reboot of the series of the same name, discarding the continuity built up over the previous eight games in favour of a fresh take on the premise and the central character of Lara Croft. Croft was very much a child of the 1990s: ballsy, confident, arrogant and a bit cartoonish. Her fresh incarnation is younger, constantly doubting herself and doesn't know how to chamber a round, let alone how to dive around dual-wielding pistols and shooting tigers. This is, much as it pains me to say it, a 'gritty and more realistic take on the character'.

Tomb Raider is a curious hybrid of several game types. It's a third-person action game with a linear story, but which keeps the map open, allowing you to revisit previous areas to find more resources and new locations, once you have unlocked new equipment later in the game which allows you scale previously-inaccessible cliffs and blast open hitherto-invulnerable blockades. It isn't an open-world game - the island is portrayed as an interlocking series of explorable zones, not a wide-open space like the recent Far Cry 3 - but it throws in enough nods at an open world structure to make for an interesting hybrid. The semi-open-world structure makes for a curious incompatibility with the game's storyline, however, which is almost always urgently demanding you rush to the next objective and complete the next mission. This urgency is diminished when Lara decides to spend 2 hours painstakingly combing a forest for GPS trackers and magic mushrooms. Doing these side-objectives is important as it gives you more experience points which you can use to improve Lara's abilities, and also gives you more salvage to upgrade your weapons and equipment with.

Lara is a fairly athletic character, able to scale vertical walls with the help of an improvised pickaxe, jump large distances and shimmy all over the place on rope bridges, some of which you create yourself by using a bow and rope-arrows. The game signposts where you can use these tools - literally by using a special view mode which highlights all usable objects in an area in bright yellow - but it can be fun seeing your destination and working out how to get there using the tools at your disposal. Tomb Raider is at its best when you have control for long periods and are given objectives without being hand-held through the whole thing. This is best exemplified by the optional tombs, which Lara has to explore (or 'raid', if you will) through her own ingenuity. Unfortunately, these tombs tend to revolve around one puzzle each and most of them about about 50 feet across in size, making them more like the 'dungeons' from Skyrim that consist of one winding passage and two rooms than substantial locations in their own right. Still, the idea is good. 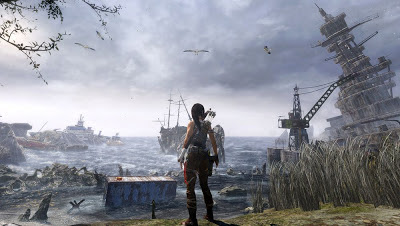 There is also quite a lot of combat, initially against animals (though, sadly, not tigers) and later on against human opponents. The gaming media has gone rather overboard in praising the scene in which Lara overcomes her first human opponent, kills him and then expresses realistic feelings of shock, panic and revulsion at having to do such a thing. All of this is effective in the moment, but undercut by Lara blowing away hordes of attacking nutcases literally a minute later without any qualms at all. By the endgame, in which Lara has to taken on an entire army of attackers in a temple forecourt spanning multiple levels and featuring tons of explosive barrels you can detonate to obliterate half a dozen foes at a time, this moral disconnect between story and gameplay has become absurd. Entertaining, certainly, but the game's musings on the desensitisation of killing and possible symptoms of PTSD ultimately feel like a sop to critics of videogame violence more than any real desire to explore the issues in depth (something else it shares with Far Cry 3).

When the game stops wangsting about this stuff, it's often excellent. The freeform stuff is very good. Unfortunately, the main storyline is corncheese. It starts off trying to be grim and gritty and realistic, but by the end it's become an out-and-out fantasy involving undead creatures and spirit beings. Major story beats are transmitted through either cut scenes or particularly tedious Quick Time Events. The game's use of QTEs is obnoxious and over-the-top, taking over from the proper gameplay all too often. So do cut scenes, which are not differentiated from the gameplay either, often with the camera retaining its standard position over Lara's sholder, meaning (particularly in the first hour or so) that sometimes they end and the player has no way of knowing they're back in control until they die. Also, the game's moment of victory is in a cut scene rather than through player agency, which is a completely unfathomable decision. The less said about the supporting cast - Lara's fellow castaways who are only around to get rescued or provide awful dialogue about why Lara's next plan is going to fail despite her last three working fine and saving all their live - the better as well. From a technical standpoint, the graphics are excellent (despite the odd glitch), the controls are smooth, responsive and fully customisable (and you can remap the Enter key, which is awesome and inexplicably rare these days) and overall the game is fun to play.

The problems prevent Tomb Raider (***½) from achieving its full potential. The game's curious mixture of Far Cry freeform jungle stuff (including hunting and skinning animals), Prince of Persia style puzzle-solving using the equipment available, enjoyable combat (including one of the best and most natural cover systems I've seen in a game) and tons of bonus objectives all makes for an excellent gaming experience. But that experience is undercut by the game wrestling control away from you all too-often for indifferently-written cut scenes and repetitive Quick Time Events. When the game lets you play it how you want to, rather than how it wants to, it's superb. The game is available now in the UK (PC, PlayStation 3, X-Box 360) and USA (PC, PlayStation 3, X-Box 360).
Posted by Adam Whitehead at 11:35

So this is basically Tomb Raider meets Arkham City? in terms of the game world...