Cover blurb for THE REPUBLIC OF THIEVES

Via A Dribble of Ink: 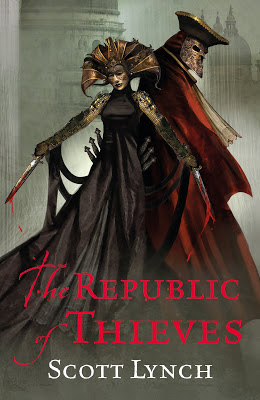 Locke and Jean barely escaped with their lives from what should have been the greatest heist of their career, in the port city of Tal Verrar. Now they head north, looking for sanctuary and an alchemist who can cure the poison that is slowly killing Locke. They find neither, but with their luck, money and hope exhausted, they receive an offer from a power that has never had their best interests at heart: The Bondsmagi of Karthain.

In exchange for the chance that Locke might be saved, the Bondsmagi expect the two Gentlemen Bastards to rig an election in their home city of Karthain. They will be opposed. The other side has already hired the services of Sabetha Belacoros, the one person in the world who might match Locke’s criminal skill, and the one person in the world who absolutely rules his heart.

Now it will be con artist against con artist in an election that couldn’t be more crooked, all for the benefit of the mysterious Bondsmagi, who have plans within plans and secrets they’re not telling…


The Republic of Thieves will be published by Gollancz in the UK on 10 October 2013 and Del Rey in the USA on 8 October. It should be noted that the UK hardcover is currently about half-price as a pre-order on Amazon.co.uk.

I am already planning to acquire an advance copy by putting together of team of like-minded bloggers with complimentary skill-sets to raid Gollancz HQ in a manner Locke would be proud of. Unfortunately, Gollancz have assembled their security team from the cream of SFF villains and entities, meaning that the last obstacle to getting hold of the manuscript is defeating the Shrike. This may not go well.
Posted by Adam Whitehead at 18:21

Email ThisBlogThis!Share to TwitterShare to FacebookShare to Pinterest
Labels: gollancz, news, scott lynch, the gentleman bastard, the republic of thieves

Looking forward to your review of this Adam. I haven't been disappointed with the first two books. :)

I can't wait for this book. Scott Lynch is a terrific writer and story teller.

October seems so far away :(

Gollancz better beef up their security!

Dat cover!
I would pre-order, but I've not read even the first book. And looking the HC version on Amazon yields one with a horrible text only cover, I saw, f that, I'd rather be without.