Hasbro have challenged Warner Brothers' right to make a new Dungeons and Dragons movie. In a balshy statement, Hasbro have started they own the D&D IP and are developing their own movie project with Universal. 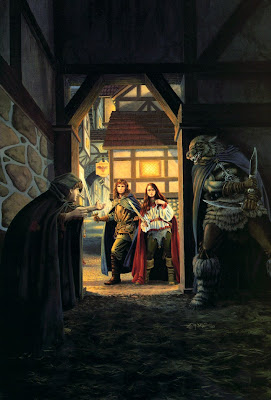 Hasbro attempts a backstab on Warner Brothers, hoping for +8 damage.

To recap, Wizards of the Coast, who acquired the Dungeons and Dragons IP in 1997 by buying the original creators of the game, TSR, had previously licensed the film rights to film-maker Courtney Solomon. Solomon produced a film in 2000 that was a box-office bomb. Solomon retained the film rights, producing two live-action sequels. Meanwhile, Hasbro bought Wizards of the Coast in 1998 and they produced a Dragonlance animated movie in 2008, which didn't step on the existing film rights by avoiding any potential areas of dispute. Earlier this week it was confirmed that Warner Brothers were developing a new big-budget movie with Solomon on board as producer.

Apparently this dispute has come up before and in a binding arbitration process, Solomon's ownership of the film rights was confirmed. Clearly Hasbro didn't accept the 'binding' part of that agreement and it's likely there will be further legal shenanigans before either film project can proceed.

D&D uses a lot of fairly generic fantasy material - elves, dwarves, wizards, clerics, dragons, lightning bolts, fireballs etc - but it does have some specific elements that likely would be affected by the issues, such as drow, beholders and specific spells like Melf's acid arrow. The rumour is that Hasbro has been working to bring some of the more popular D&D worlds and novels to the screen, such as R.A. Salvatore's Drizzt Do'Urden books, but it'd be impossible to do so without treading on areas covered by the existing film deal, which means they wouldn't be able to use them. It remains to be seen how this pans out.
Posted by Adam Whitehead at 15:21

Hasbro COULD make a film based on exisiting D&D books IF they didn't use any spell names or races from the core books. That's why they were able to pull off the Dragonlance movie those years ago. The main problem with making a movie would be in finding source material that could be used to make a decent blockbuster. The Crystal Shard is an obvious choice, but if they were to use that Drizzt could not be called a drow, and any spells used would have to have different names and somewhat different effects.

Actually, drow go back a long way in Norse myth, though not in exactly the form they take in D&D. All the named spells and things could be problematic, as well as monsters like beholders and illithids.

I would care if I dident think neither party cared about making something good.

That's dark elves in Norse Mythology. The name "drow" is a creation of Dungeons & Dragons.

I kind of dread this movie no matter who's making it, after having seen the first one in theatres. But I am interested in seeing the results of the legal battle they've got going on; I want to know who's going to come out the victor, even if I don't end up seeing the movie they'll make.