WORLD OF ICE AND FIRE delayed by a year

Unfortunately, news has arrived that The World of Ice and Fire, the Song of Ice and Fire companion volume, has been delayed by a full year. According to co-author Elio Garcia, this is because plans for the book have become more ambitious, with a desire from the authors and publishers to make the book bigger and include more artwork. The book is already in an advanced stage of completion, but the decision to include more material could not guarantee a late 2013 release date, so rather than risk a last-minute delay, the decision was made to hold back the book until 2014 to give the writers and artists more time to complete their work. 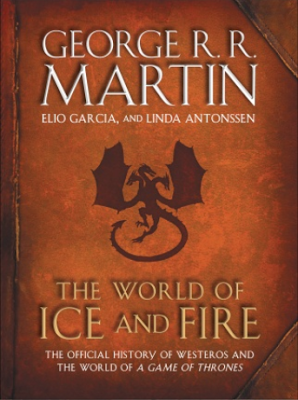 The late 2014 release date is because such large books sell best in the pre-Christmas market, so releasing the book earlier in 2014 (which should be feasible) wouldn't make much commercial sense.
Posted by Adam Whitehead at 11:54

Email ThisBlogThis!Share to TwitterShare to FacebookShare to Pinterest
Labels: a song of ice and fire, elio garcia, george r.r. martin, linda antonsson, news, the world of ice and fire

They want to make it bigger and include more pictures, etc.?

That sucks. I was really looking forward to that, especially since GRRM mentioned at least once that he'd ended up writing way more "lore" and other stuff for it than he originally planned to do.

Hopefully it won't push up the price, but we'll see.

Why does all the good stuff get delayed. It's bad enough we have to wait 10 years between books, I was looking forward to this companion piece to fill a void.

Incredibly disappointing. I'd rather they'd just published what they had instead of waiting one more year, once again. There is no end to the delays for everything one wants to see in Westeros. Except the tv series of course, which is run properly and is not in GRRM's hands.

Just curious if GRRM is done with his work on this? I am not aware of all news sources regarding his completeness but here is what I found on his blog:

01/06/2011 – In a summary work posting he stated “getting back into THE WORLD OF ICE AND FIRE, the long-promised concordance I am doing with Elio and Linda, which is almost three years late at this point, and needs to be finished and delivered by year's end”
http://grrm.livejournal.com/2011/06/01/

23/06/2012 – He announces completion of LANDS and states this “THE WORLD OF ICE AND FIRE. The concordance. Elio and Linda are my partners on this one, a compendium of the history and legends of the world of Westeros. A coffee table book, lots of gorgeous art from such talents as Ted Nasmith, Justin Sweet, and others. Making good progress on this one of late, lots of great historical stuff that I think my readers will enjoy. Never before revealed details of Aegon's Conquest, the War With the Faith, The Dance of the Dragons, the Paramours of Aegon the Unworthy, etc.”
http://grrm.livejournal.com/283248.html

15/09/2012 – He updates the work on WORLD “I am writing the "sidebar" (hoo hah) about the first Dance of the Dragons, the fratricidal civil war between King Aegon II and his half-sister Rhaenyra, for THE WORLD OF ICE AND FIRE, and it's turned into a monster too.

As of today, I have a hundred and three bloody manuscript pages (some VERY bloody) and still no end at hand. I had hoped to finish this one today, but... no, not even close. Lots more to write.”
http://grrm.livejournal.com/291766.html

22/01/2013 – He announces completion of DANGEROUS WOMEN with what looks to be a story taken from the history he is working on.
http://grrm.livejournal.com/310198.html

I was unable to find any announcement that he has turned his work in despite his stated preference for making those announcements “This is for those who complain I never blog about my work. (I do, but not often. I prefer to announce when something is finally done, rather just endless reiterations of "I am working on X, I am working on Z," and I am never going to be one of those "I wrote three pages today" writers. Sorry, that's not how I roll).”
http://grrm.livejournal.com/283248.html

Can NOTHING associated with this series ever come out on time? Novel delay follows novel delay and now they can't even finish a companion book by release date?
Karma is a nasty thing...I seem to recall GRRM poking fun at Robert Jordan's The Wheel of Time a few years back for never ending and always delaying (after RJ's cover blurb on Game of Thrones helped GRRM sell that book).
Looks like the shoe is on the other foot now...

Maybe they think it will sell better next year knowing that people will be anticipating...an early 2015 WoW release...

I think the bulk of the GRRM-written material for the book itself (i.e. the sections he's written directly) are done, or almost so. The question is how much GRRM-originated notes and material that Elio and Linda have to work from remains to be supplied, and how time-consuming that is.

The very long (103 MS page+) 'sidebar' has pretty much turned into THE PRINCESS AND THE QUEEN, the story for DANGEROUS WOMEN, so that's certainly finished.

What - a delay on a GRRM book - surely this can't be happening - he has been so efficient in his writing and so responsive to the fans who need to get more of the world of Ice and Fire - this is a disturbing turn of events - I hope it doesn't become a trend!

I still have yet to read that series at all, but even I'm raising an eyebrow at how often there seem to be release delays with it and associated materials.

Well, here's hoping that the extra content will make the delay worth it for buyers.