British actor Jeremy Bulloch, best-known to millions of people worldwide for originating the role of Star Wars antihero Boba Fett, has passed away at the age of 75. 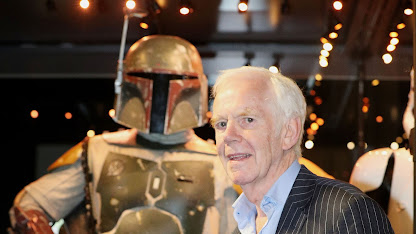 Born in Market Harborough in 1945, Bulloch began acting at a young age, appearing in commercials before making his film debut in the classic 1958 disaster movie A Night to Remember, playing a young boy jumping into the sea from the sinking Titanic. He made his TV debut two years later. He had recurring roles in TV shows such as Billy Bunter, The Newcomers,Agony and Robin of Sherwood as well as appearing in films including Summer Holiday, Carry On Teacher, Mary, Queen of Scots and The Devil's Agent. He continued appearing regularly on screen until 2009, when he unofficially retired.
His SFF credentials kicked off with appearing in the 1965 Doctor Who serial The Space Museum. He returned to the show in 1973, playing the prominent role of Hal in the Jon Pertwee adventure The Time Warrior. He later had a recurring role on the series Starhyke.
He was cast in the role of Boba Fett in the 1980 movie The Empire Strikes Back, playing his role behind a mask. Like fellow British actor David Prowse (who passed away a few weeks ago), his vocal performance was replaced by another actor, in this case Jason Wingreen. Unlike Prowse, who never quite got over this move, Bulloch accepted it with equanimity, returning to the role in Return of the Jedi and maintaining good relations with George Lucas. He also played an Imperial officer in The Empire Strikes Back and Captain Colton, the commander of Bail Organa's personal transport Sundered Heart, in the film Revenge of the Sith.
A fan-favourite on the convention circuit, Bulloch made many friends with fellow performers and fans, and was noted for his professionalism, unfailing politeness and good humour.
He will be missed, but the role he established will live on: one day after his passing, Disney confirmed that Boba Fett will finally get a starring role in his very own TV series, The Book of Boba Fett, due to air in December 2021.
Posted by Adam Whitehead at 14:30