Fans of fantasy legend J.R.R. Tolkien are raising funds to buy the house where the author wrote The Hobbit and The Lord of the Rings, along with parts of The Silmarillion. 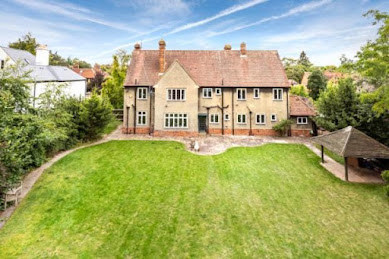 The house is located in Northmoor Road, Oxford, and was where the Tolkien family lived from 1930 to 1947. The six-bedroom house was built in the 1920s as a residence a local bookseller, before being redeveloped for staff at Oxford University, in which capacity Tolkien and his family took up residence.
Tolkien began work on The Hobbit in the late 1920s, but only typed up the story at Northmoor Road starting in 1930. It was published (after revisions) in 1937. Tolkien began work on The Lord of the Rings in 1937, completing it in 1947. It took a further two years to type up and edit, and the book was eventually published in three volumes between 1954 and 1955.
Project Northmoor is a fan-led project to purchase the property and develop it as a centre for Tolkien research and studies. The project has attracted the support of Martin Freeman, Ian McKellen, John Rhys-Davies, Derek Jacobi, Annie Lennox and the retired Archbishop Rowan Williams, among others. Tolkien fan groups are also supporting the effort.
Posted by Adam Whitehead at 17:52

very strange; Why do they want to give the house owner 4 million gbp when he bought it for 1.5?

It's rather ridiculous that this is a fan lead initiative, as opposed to one taking on by the University or the city of Oxford. In addition to simple heritage preservation, which is the point, there's also money to be made and it would be a no-brainer to create a small museum and an artist or academic in residence program. All the resources are there. Completely separately, they should also preserve the Bird and Baby, where the Inklings met. It'll be a sad day if that place ever closes or is substantially remodeled and we lose the opportunity to go and get a beer and imagine their conversations.

Inflation in the UK housing market is insane.

I don't know... maybe I'm overly cynical but I wonder this is more about the real estate than the author. If I was part of an initiative like this, I would not so casualy offer the owner almost 3 times more than he paid for it.