In sad news, science fiction and fantasy author Phyllis Eisenstein has sadly passed away at the age of 74. 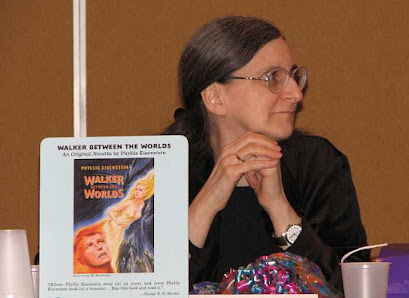 Eisenstein was born in Chicago and began publishing fiction in 1971, with "The Trouble with the Past" (a collaboration with her husband Alex) in New Dimensions 1, edited by Robert Silverberg. She was nominated for the Hugo twice: for her novella In the Western Tradition (1982) and the novelette Nightlife (1982). She was nominated for the Nebula three times, for In the Western Tradition, "Attachment" (1976) and The Island in the Lake (2000). She also won a Balrog Award for Born to Exile (1980) and was a British Fantasy Award finalist for Sorcerer's Son (1980).

She only published six novels in her career: Born to Exile (1977) and In the Red Lord's Reach (1989), in the Tales of Alaric the Minstrel series; Sorcerer's Son (1979) and The Crystal Palace (1988) in the Book of Elementals series (published in an omnibus under that title in 2002); and the stand-alones Shadow of Earth (1979) and In the Hands of Glory (1981). She completed two further novels, The City in Stone (an addition to the Book of Elementals sequence) and The Walker Between Worlds (the start of a projected new series, The Masks of Power). The former was left unpublished when the publisher, Meisha Merlin, collapsed in 2007, and the latter because she wanted to complete the entire trilogy first.

She did issue a short story collection, Night Lives: Nine Stories of the Dark Fantastic, in 2003 in collaboration with her husband, and edited several anthologies. The bulk of her short story output remained uncollected, however.

Eisenstein was also active in critiquing work by friends and colleagues. Arguably the most influential of these moments came in 1991 when her friend George R.R. Martin passed her the first few chapters of a novel he was working on set in an imaginary world, but featuring no SF, magical or fantastical elements at all. He was struggling with what to do with the story. Aware of his admiration for writers like Tolkien, Zelazny and Howard, she urged him to "put the dragons in" and turn it into a broad work of epic fantasy. Martin complied, resulting in the novel A Game of Thrones (1996). Martin acknowledged Eisenstein's influence by dedicating the third volume in the series, A Storm of Swords (2000), to her.

She passed away after a short illness and is survived by her husband.

Very sad to hear this. Sorcerer's Son is a great book and The Crystal Palace was a decent sequel.