Neil Gaiman to write a story for THE LAST DANGEROUS VISIONS

J. Michael Straczynski has confirmed that Neil Gaiman is the first current author to pen a story for the release version of The Last Dangerous Visions, Harlan Ellison's long, long-gestating anthology project. 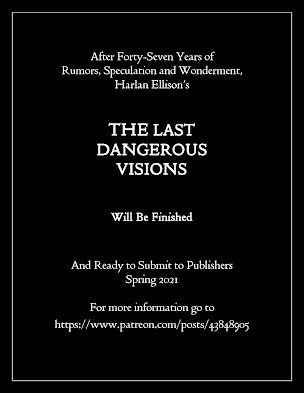 As discussed previously, The Last Dangerous Visions was the third in a series of anthologies Ellison planned to publish in the 1970s, as the ultimate word on the scale and scope of the SFF field at the time. The project was immensely delayed, ballooning to enormous size, and eventually seems to have been shelved, although Ellison vowed to eventually release it. After his passing in 2018, the project was taken up by Straczynski, now serving as the executor of the Ellison Estate.

The project has been somewhat reconceived (in line with Ellison's oft-stated intentions) with the idea to include a number of new stories by modern authors in the contemporary SFF field, along with up-and-comers and even one debut author. The project is planned to be submitted for publication in 2021.

Straczynski is providing additional information on the project over on his Patreon page.