Lucasfilm have confirmed they have a large number of new Star Wars projects currently in development. As with Disney's recent slew of announcements about the Marvel Cinematic Universe, the Star Wars news focuses primarily on television. 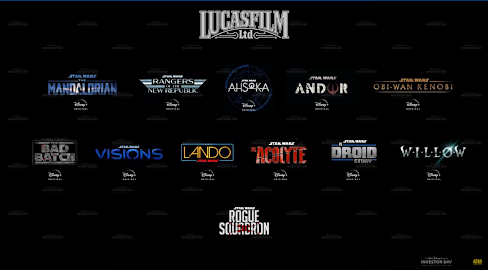 The exception to the TV news was the formal confirmation of the next Star Wars feature film. Rogue Squadron is scheduled for release on Christmas Day 2023 and will be helmed by Wonder Woman director Patty Jenkins. Jenkins' father was a US fighter pilot who flew F4s for the US military, making the appointment appropriate. Jenkins' video and the logo both show a Rebellion-era T-65 X-wing, suggesting the film will be set around the time of the original trilogy or maybe shortly afterwards.

The only other movie news was confirmation that Taika Waititi would be helming a Star Wars movie. Nothing was revealed about the content other than it is "fresh" and unusual, hinting that Waititi will be bringing his signature comedic slant to the franchise. This isn't Waititi's first space rodeo, since the director previously helmed an episode of The Mandalorian in its first season.

The TV show news was divided between things we knew about and new announcements. Andor began shooting two weeks ago and sees Diego Luna return as Rebel spy and intelligence operative Cassian Andor, and will depict his adventures in the run-up to the events of Rogue One. Genevieve O'Reilly also returns as Mon Mothma. Obi-Wan Kenobi is due to start shooting shortly and will be set on Tatooine ten years after the events of Revenge of the Sith and nine years before the events of A New Hope. The film sees Ewan McGregor return to the role of Obi-Wan. Curiously, it will also see Hayden Christensen reprise his role as Anakin Skywalker/Darth Vader, presumably in flashback sequences or maybe visions of some kind.

The Clone Wars is getting a sequel series in the form of The Bad Batch, focusing on the members of Clone Force 99, a group of discontented Clone Troopers, in the months and years following the fall of the Old Republic. Another animated series, Visions, will feature 10 anime-inspired short films from Japanese animation studios, whilst A Droid Story will focus on R2-D2 and C3-PO getting into scrapes with a new character.

The Mandalorian is getting two spin-off TV shows which will be set in the same timeframe. Ahsoka will pick up with Rosario Dawson as Ahsoka Tano and follow her adventures, possibly using the World Between Worlds as a narrative device. Rangers of the New Republic sounds like it will be a more original idea focusing on the people helping build up and extent the New Republic's influence.

Lando is a spin-off show focusing on Lando Calrissian (natch), but it's unclear if this will be a show focusing on Billy Dee Williams's older version of the character or Donald Glover's younger version, or perhaps both (with the former framing flashbacks to the younger).

Most intriguing is The Acolyte, a show set during the High Republic era. This era is the focus of a new series of novels and comics set in a time period 400 years before the prequel movies, and it'll be intriguing to see what the TV series will add to the experience.

The Lucasfilm release schedule is as follows:

They actually announced three non-Star Wars projects. The third was an adaptation of Tomi Adeyemi's Children of Blood and Bone.