Earth has been attacked by an alien superweapon. Florida and the Caribbean have been left in flames and over seven million people are dead. The alien attackers are traced to a mysterious region of space known as the Delphic Expanse and an alien race known as the Xindi, so Starfleet sends the NX-01 Enterprise to the region to investigate further and stop the Xindi before they can launch a second attack. 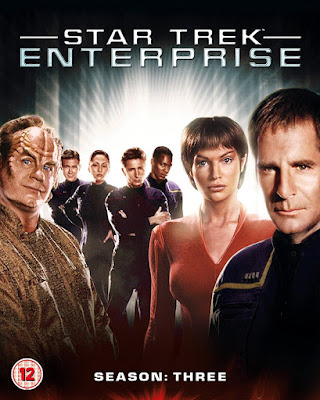 According to conventional wisdom, Star Trek: Enterprise gets a lot better with its third season. The show's best writer, Manny Coto, was promoted to producer and given more creative freedom. The entire season also has a strong, ongoing story arc. It's still not full-on serialisation - many episodes are still stand-alone, just with more frequent mentions of the ongoing storyline - but it's closer than Trek has gotten before across a whole year. There's also more attention paid to character growth, such as T'Pol developing an addiction to a chemical and then going through withdrawal, leaving her permanently emotionally damaged, whilst the human crewmembers initially hunger for revenge against the Xindi before learning more about them and how they've been manipulated by another alien race.

It is certainly true that Enterprise's third season is more interesting than the first two. There is more of a sense of tension and drama and the show feels more experimental. Long-term Trek producers Rick Berman and Brannon Braga, criticised by many fans for presiding over the long-term decline of the franchise, seem to have backed off and given Coto more freedom to innovate. The producers cleverly realised that their storyline, although it had legs, was still insufficient to fill 25 episodes, so were still able to bring in side-stories to expand the texture of the new setting of the Expanse. Although some of these episodes are undeniably filler (Extinction and Rajin are groan-inducingly boring), there seems to be a far higher hit rate than in previous seasons.

The season also gives us Enterprise's first truly classic episode. Twilight riffs on previous episode ideas but also takes a strong influence from the movie Memento, with Archer affected by a neurological problem which prevents him from forming long-term memories. The episode unfolds as an alternate view of what happens if the Enterprise's mission fails and, although we know it won't, the episode is well-written and directed enough that it doesn't matter too much.

Other strong episodes include Proving Ground (even if the arrival of Andorian occasional semi-ally Shran is a little implausible), Strategem and Doctor's Orders (an excellent showcase for John Billingsley's acting). The season also ends with a strong arc starting with Azati Prime, where Enterprise takes incredibly heavy damage and is left crippled for the rest of the season. The crew have to find a way of destroying the Xindi weapon without having their normal resources to call upon, so have to resort to a diplomatic solution. In a post-9/11 world and with the far darker Battlestar Galactica reboot hitting screens at the same time, Enterprise takes a very different approach is still very true to the ethos of Star Trek, and does so reasonably well. The season-ending cliffhanger is less than compelling, however.

The third season of Star Trek: Enterprise (****) is indeed better than the first two and the finest season of Star Trek since the end of Deep Space Nine. It's not perfect and occasionally resorts to tiresome Star Trek standbys, but it entertains and successfully finds a solution to the season-long arc that channels Star Trek at its finest. The season is available now on Blu-Ray (UK, USA) and on Netflix in the UK and Ireland.
Posted by Adam Whitehead at 10:59