The two greatest video games of all time get new editions

The two greatest video games of all time (arguably) are both being re-released in spanking new editions fit for modern gamers.


First up is StarCraft Remastered. Blizzard have confirmed that they are re-releasing the original, classic StarCraft and its expansion Brood War is a new edition complete with new resolutions (essential as the old game had a locked, low-res perspective) and reworked graphics. Surprisingly, the game is still in 2D and does not use the StarCraft II engine. Although not confirmed, it is also assumed that they will be replacing the old, CG cut-scenes with reworked ones.

The original version of StarCraft will remain available but, impressively, will now be free. Even more startlingly, as StarCraft Remastered uses the same codebase as the original, players will be able to switch between modes at the touch of a button and original players will be able to play against those using the new version of the game in multiplayer.

More controversially, the UI will apparently not be improved. This means that you will still only be able to select 12 units at a time and you won't be able to auto-send newly-built units to resources.

Despite these age-old limitations, StarCraft is still widely regarded as one of the best real-time strategy games of all time (challenged only by Company of Heroes, Hostile Waters and Homeworld), mainly due to its sublime unit balance between three completely different sides and fast-placed gameplay. Arguably, StarCraft II added too many variables to the mix and made the game a bit more challenging, whilst the original's smaller roster still allowed for a wide mix of strategies whilst being more constrained. Less arguably, the original game has a far better-written, more interest and more concise story than the sprawling, increasingly silly sequel. 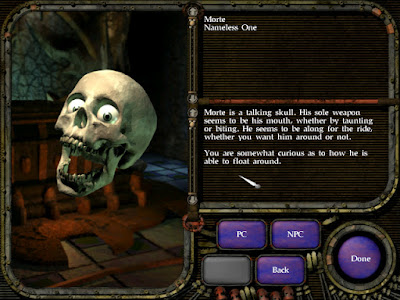 Also getting the remaster treatment is (probably, although it's not been quite 100% confirmed yet) Planescape: Torment. Widely-regarded as the greatest CRPG of all time, the game is set in the Outer Planes and the bizarre city of Sigil, and sees the player taking on the role of the Nameless One, an immortal entity who has to discover the secrets of his past and the nature of his own reality. The game is notable for its commitment to dialogue, characterisation and ideas over combat, blood and looting. The game recently gained a "spiritual successor" in the form of Torment: Tides of Numenera.

Planescape: Torment Enhanced Edition is being handled by Beamdog, who previously handled the expanded and enhanced versions of both Baldur's Gate games and the two Icewind Dale titles.
Posted by Adam Whitehead at 19:05

Considering all of the love you've given Planescape: Torment over the years this is exciting news for a gamer who follows your blog and has never played it. Any chance this makes its way to consoles?

I am super-stoked for a remastered edition of Starcraft, and am looking forward to playing the campaigns again with it.

I hope they don't totally redub over the voices, though. Infested Kerrigan in Starcraft and Starcraft Brood War had a kind of venomous humor to her that Kerrigan from Starcraft 2 onward didn't have, and I liked Zeratul's original voice more too.

Assuming it follows the conventions of the other remasters, it'll be available on tablets as well as PC. It should also be playable on low-spec laptops. I think Beamdog looked at getting them on consoles but there's lots of technical and control issues that makes it very unlikely to happen.

I thought by "two greatest video games of all time" you were referring to Daikatana and Superman 64. I guess those other two are fine too.