They called it the Second Pulse: an unexpected collapse of glacial valleys in Antarctica that poured billions more tons of ice into the world oceans than was ever expected. Global sea levels rose by fifty feet in a few years, displacing hundreds of millions of people and triggering an economic meltdown. The world recovered, but it had to adapt. 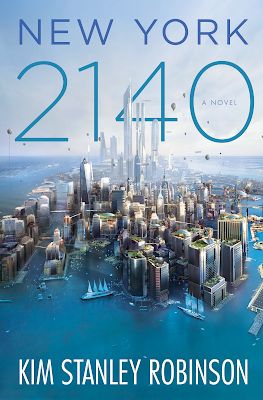 In New York the lower half of Manhattan was inundated, becoming a "Super-Venice". New Yorkers are a hardy breed and they keep trucking along, taking skybridges and boats to work instead of taxis and trains, and still grumbling about the weather. For the inhabitants of the Metropolitan Life Insurance Building on Madison Square, life continues in this changed world. But when two residents are kidnapped and the city is threatened by a tropical storm, the tower becomes the centre of a sequence of events which could change the world.

New York, New York, so great they named it twice. In novels and on screen, it's been blown up, hit by meteors, invaded by aliens, attacked by Godzilla and King Kong and been subjected to every disaster that the human mind can conjure. Kim Stanley Robinson is the latest author to take a crack at subjecting the city to catastrophe, but his one is both much simpler and more plausible: a significant rise in sea levels. Lower Manhattan is transformed into a series of islands, buildings connected together by bridges and boat taxis, the city at considerably greater risk from storm surges and hurricanes but New Yorkers carrying on as normal because that's what they do.

Robinson is one of SF's most interesting voices, mixing realism with a healthy optimism with real scientific vigour with an interest in macroeconomics. His work veers from the large scale to the intimate: his Mars Trilogy remains the final word on the colonisation of the Red Planet, whilst Galileo's Dream, Shaman and the Science in the Capital trilogy have been more down-to-earth works. Generation ship drama Aurora and his state-of-the-Solar-System epic 2312 have shown a general trajectory back to large scale events, as will his next novel (in which China colonises the moon). New York 2140 takes a different tack, depicting a vast, complex and changed world through the prism of the (now very soggy) Big Apple. There's some interest to be found from parsing the ultra-cynical, profit-driven city through the eyes of Robinson, a Californian utopian scientist through and through.

So this is a book which examines the future of human society through the greatest city humanity has ever built (and maybe ever will build), but the book zooms in even further than that, concentrating on the inhabitants of the Metropolitan Life Insurance Building on Madison Square (the one with the impressive giant clock), now, like so many other buildings, an island rising from the waters. The main characters include NYPD office Gwen, a lawyer named Charlotte, a hedge fund manager, two homeless kids, the building's supervisor Vlade (whose tasks involve making sure the building doesn't sink or collapse from waterlogged foundations) and a cloud video star named Amelia who has her own web channel covering her attempts to save endangered species using an airship. The plot initially appears rather diffuse, with the kidnapping of two computer programmers from the building providing a dramatic spine but the book moving away from this for lengthy tangents on matters material, political and financial, but eventually the sprawling plot threads come together for a fascinating conclusion.

Robinson is that rarest of beasts, a hard SF author who can actually write. His prose is vivid, flows well and changes tonally between narrators (hedge fund manager Frank gets his chapters written in first person, unlike everyone else, just because Robinson likes mixing things up a bit). New York 2140 is simply a tremendous pleasure to read from start to finish for this reason. Robinson is also a bit on the light-hearted side of things here. That's not to say there isn't serious drama and incident (there is, especially when a tropical storm hits the city), but Robinson mitigates this with a sense of humour and an genuine outsider's appreciation for the city.

Really, New York 2140 is a love letter to a city that you'd think doesn't need any more, but works anyway. The city is peppered with anecdotes from the city's history, most of them true. It's startling to learn that Met North (the building adjacent to the Met Life Insurance Building) was supposed to be a supermassive skyscraper taller than the Empire State Building but was abandoned after 30 floors for financial reasons, or that in 1903 an elephant made a break for freedom from Coney Island and swam three miles across the Narrows to Staten Island before being recaptured. Robinson's list of sources and stories will have readers hitting the internet to check out the awesome 18th Century British topographical surveys of the mostly-unsettled Manhattan Island, or confirm that Manhattan is actually sloped with the southern part of the island much lower than the northern. Most insane is the story that a British warship carrying gold to pay its troops, HMS Hussar, sank in New York Harbour and was never recovered. The money on board would be worth hundreds of millions of dollars today, but since the Bronx has been extended over the site of the wreck it can't be recovered. Implausibly, but entertainingly, this becomes a major plot point in the novel.

The book is mostly successful but occasionally flounders: the novel is a little too consumed with economic history and a few jokes wear thin ("sunk costs" is a term that takes on a new meaning), but these points remain minor.

New York 2140 (****½) is more than a well-written profile of the city. As the book continues it gains drama and urgency and ends on a note which moves the story far beyond New York's borders to take in the entire world. It's a little bit too neat and maybe too optimistic, but the book's (unnamed) narrator acknowledges this and points out that the great social transformation which results from the book's events may be temporary. But overall New York 2140 is Robinson at his best: brimming with verve and humour and hope, taking all the knocks that politics and economics and cold science can throw at us and showing that humans can always adapt, change and prosper. The novel is available now in the UK and USA.
Posted by Adam Whitehead at 17:37

Thanks Adam. Agree with your assessment. Really great book. Robinson is always a must buy for me.

Great post and review. Question. The character named Gen Octaviasdottir in the novel, is her name perhaps a homage to SF pioneer Octvia Butler? Nobody has mentioend this yet in reviews or interviews. What your take? RSVP - cheers, Dan

I think he's only gotten better in the last 10 years - Shaman in particular was an understated gem of a book. Galileo's Dream was the only recent novel of his that I thought underperformed - everything else has been a must buy .