When I was a kid I enjoyed playing board games. There was the Pac-Man board game and Lost Valley of the Dinosaurs and Escape from Atlantis, amongst many others. When I got a bit older there was the epic Hero Quest and Space Crusade and Axis and Allies. As a teenager I stopped playing them: the UK board game market dried up and I moved on to roleplaying games like Dungeons and Dragons, Deadlands and Star Wars. 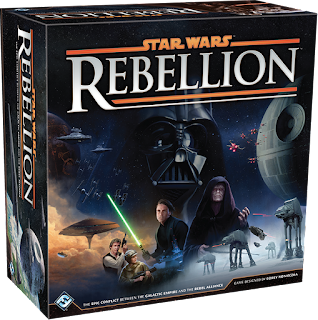 But now board games are back, and in a big way. For the last few years there's been an explosion in the market. It's growing at an exponential rate and very few months pass without another game smashing Kickstarter targets or getting a few more expansions. Some of the better games of this latest explosion include Descent, Flash Point and of course the epic Pandemic and its recent Legacy reiteration. Epic fantasy is also getting in on the act, with Games Workshop now in its sixteenth year of its Lord of the Rings tabletop wargame and Fantasy Flight's A Song of Ice and Fire board game being one of the best-regarded in the business (and CMON Games are looking to introduce a tabletop wargame based on the books soon).

I recently picked up my first board game in over a decade. Star Wars: Rebellion shares a name with the 1998 strategy video game of the same name (released as Supremacy in the UK) and has a broadly similar set-up. The Rebel Alliance is trying to foment a galaxy-wide uprising against the Empire and needs both time and allies to achieve that. The Empire is is trying to crush the Rebellion before it can really get going by destroying its hidden base. The Empire has overwhelming superiority of strength but the Rebellion is more mobile and capable of sabotaging the Empire's war machine.

The game is played on an enormous board featuring thirty-one star systems from the Star Wars universe: Coruscant, Corellia, Ord Mantell, Dagobah, Yavin, Hoth, Tatooine and more are present and correct. One of these planets is home to the Rebel Base, but the Imperial player doesn't know where it is. Using probe droids and manually searching each planet, the Empire has to eliminate the possibilities until they find the base and destroy it. The Rebels can slow down the Empire's advance by undertaking sabotage missions (essential if you don't want a wall of Star Destroyers advancing across the map by the fifth turn) and also engaging in misinformation, getting the Empire to send troops to the wrong planet or diverting their forces by mounting a military attack elsewhere.

The game features an impressive array of counters, dice, cards (so many cards) and miniatures. There are tiny stormtroopers and Rebel troopers, snowspeeders, AT-ATs, AT-STs, TIE fighter squadrons, X-wings, Y-wings, Corellian Corvettes, Star Destroyers, Super Star Destroyers, Mon Calamari Star Cruisers and even three Death Stars (the Empire's ability to have multiple Death Stars flying around is the most notable callback to Supremacy). The miniatures are small but being able to assemble a fleet of six Star Destroyers led by Darth Vader's Super Star Destroyer and send it to crush a Rebel planet is still an awesome feeling.

Key to the game are characters. Each side has a plethora of characters to send on missions. The Rebels can call upon Luke, Leia, Han Solo, Lando, Chewbacca, Mon Mothma and Admiral Ackbar (amongst others) whilst the Empire can call on Darth Vader, the Emperor, Grand Moff Tarkin, Admiral Piette, General Veers, as well as various other characters. You can assign characters to missions but also use unassigned characters to disrupt the missions of other characters. The Empire also has the ability to try to capture Rebel leaders and interrogate them, whilst the Rebels then have the ability to rescue them. You also use characters to take command of fleets and guide them from system to system, but they can't both command a fleet and disrupt enemy operations, leading to interesting strategic missions. If the Empire has a massive fleet waiting to move on a Rebel system, the Rebels can send multiple agents to commit sabotage or operations in that system. The Empire can choose to disrupt those operations with their leaders in that system, but won't then be able to move their fleet. If they choose not to disrupt those operations, the Rebels might win significant advantages.

The result is an intricate game based on outright military action, covert operations and diplomatic games of bluff and double-bluff, all drenched in Star Wars flavour. The result is a game that does what modern games do best: generate stories from your actions, stories that shift and change each time.

Rebellion does have several issues, although these may be features to some players rather than bugs. It's a Fantasy Flight game, so that means that the rules are not always tremendously clear. The "quick start" manual omits about half the game rules whilst the main rulebook is not tremendously detailed. Expect to spend a lot of time studying errata and forum posts to explain more bizarre rulings. There's also the fact that the game is not a quick play. In our first game, it took four hours to run through about five turns (out of a possible fourteen). That was our first time and a lot of that was taken up going through the rules, but looking at board game sites, games lasting six hours or more are not uncommon (although games in three or four are certainly quite achievable as well).

Rebellion is also strictly a two-player game. There is a team option, with two players on each team, bu it's pretty thin stuff. Those who want a grand space strategy game with multiple players is directed to Fantasy Flight's Forbidden Stars (if you can find it before the final copies are sold), which scratches some of the same itch. Of course, if you regularly have entire weekends freed to dedicate to one game, there's always Twilight Imperium (cue readers screaming and running for the hills).

I'm still yet to complete a full game, but so far Rebellion is a fine and engaging strategy boardgame that makes excellent use of the Star Wars mythos.
Posted by Adam Whitehead at 15:44

I'd love to play a lot of the recent games but the price often puts me off, Some are nearing 100 quid.

Some of the current big-box games are very expensive, yes. REBELLION will set you back about £80, which is expensive for a two-player game (FORBIDDEN STARS costs about the same but that supports 4 players which is a bit better). You get a lot of content and fun for your money though. Some people join up with local gaming groups so their games do get played.

There's a lot of really good games that are a lot, lot cheaper than that though. PANDEMIC, TICKET TO RIDE and QUADOPOLIS are all a lot less money and arguably, in some aspects, more fun.

Sounds like fun! I can't justify that many hours for a 2 player game though. :(

Every year, in lieu of a birthday party, my wife takes the kids and I play 1 game of Forbidden Stars with 3 pals. From setup to finish we usually take around 10 hours. We don't play very fast, and one annual game hasn't made us very good at the rules. But it's a blast and something I look forward to each time it approaches. So yeah, I definitely recommend Forbidden Stars.

I actually like playing the Game of Thrones board game by email. It takes forever, but letting the events play out over months gives it a very epic feel and encourages much more diplomacy. There's a fancy multilayer image on BGG that you can edit to move the pieces around. I'd do that over playing it in person.