George R.R. Martin explains delay for THE WINDS OF WINTER

Fantasy author George R.R. Martin has finally reveals why work on his signature Song of Ice and Fire fantasy series is taking so long. In an exclusive exclusive, he reveals the truth. Exclusively: 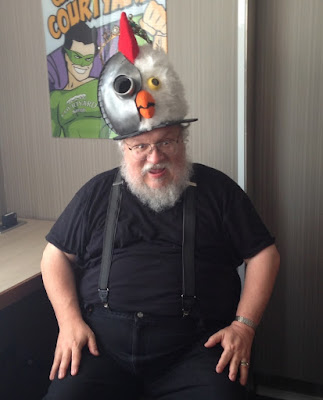 George R.R. RoboCop's first experimentation with cybernetics was only a modest success.

The truth is, I finished The Winds of Winter three months ago. Not only that, but I had the whole last book mapped out and ready to go. I was just about to send the titanic manuscript to my editor when, as so often happens on deadline day, a massive rip in the fabric of the space/time continuum formed in my office.

I heard this voice cry out “STAY THY HAND” and a figure emerged. He was dressed in leather over high-yield body armour, with his left arm replaced by some kind of laser minigun. He also had a magnificent and well-kept beard. With a shock, I realised I was looking at myself, only transformed into a Terminator-style cyborg from some kind of alternate timeline. I had to admit that I looked kind of badass.

“GEORGE!” cried the other me. “I have some come from some kind of alternate timeline where you have become a Terminator-style cyborg.” “Aha!” I said. The other me continued: “You must not publish The Winds of Winter! That is where it all started going wrong.”

“What do you mean?” I asked. “Many millions of fans are waiting for this book. You would ask me to deny them?”

The alterno-George went on to explain that for many years the Earth had been scrutinised by a hostile alien race known as the Litmongers. They had planned to invade the Earth and lay waste to human civilisation before summoning their dark god Cthulhu to unleash a millennium of pain and torment upon the survivors.

“Wait, Cthulhu is real?” I said, both horrified and impressed.

“Sort of. The Litmongers are great readers of human literature, particularly speculative fiction, and so created a malevolent entity modelled on the works of Lovecraft, which they use to subdue worlds.”

As RoboMartin continued to explain, at great length - with enjoyable-but-unconcise tangents into the aliens’ complex caste structure, heraldry and dietary preferences - the Litmongers had been poised to invade Earth in the summer of 1996 but one of their number had stumbled across a copy of A Game of Thrones. The cruel aliens had been so gripped by my expertly-crafted narrative of feuding kingdoms and subtly-complex-yet-relatable human characters (“So venomous they could eat the Borgias” – SFX Magazine) that they had stayed their hand, waiting for the series to conclude. Their patience had been worn thin by the wait for later books in the series, their arguments about whether to invade Earth and plunge seven billion souls into horrific torment or wait a bit longer to find out who Jon Snow’s dad was spilling over and manifesting themselves in bitter flame wars on the human internet.

“So I have to keep writing Song of Ice and Fire novels forever to keep humanity safe from utter obliteration?” I asked, feeling both the despair of art being subsumed by commercial requirements but also the financial security that comes from having a reliable income stream. “I’m not sure my fans will buy that. Well, not all of them.”

“Indeed!” said the Other Me. “In my timeline, after publishing The Winds of Winter the Litmonger faction that favoured invasion finally won the argument, after a particularly punishing online debate over the twist that Jon Snow is capable of time travel and is in fact his own father.”

“What?” I cried. “That was a tremendous, well-foreshadowed revelation. I was very disappointed they went in a different direction on the TV show.”

“Anyway,” said the Alternative Bearded One, moving hurriedly on. “The Litmongers invaded in full force, sweeping across the globe in a tidal wave of terror before finally triumphing. Even the mighty forces of the American military under President Sanders were unable to stop them.”

Clearly there were other changes between our timelines. But now the full weight of the horror wrought upon that world struck me. “So there was no hope? No victories to speak of?” 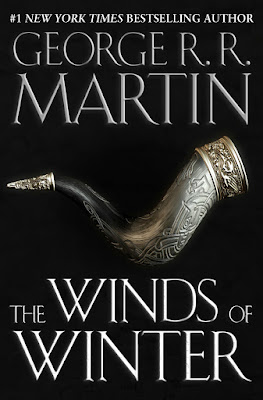 “Well, the Litmongers destroyed the United States from west to east, so technically the Giants won the NFL that year by dint of the other teams all being driven insane before being immolated ahead of them.” Ah, almost worth it. We fistbumped.

“Stall! The Litmongers have a limited time before they must return to their own world through hyperspace, after which it will be millennia before they can regroup and return. After another (indeterminate)  you can publish The Winds of Winter safely, without it resulting in the utter ruination of lifekind as we know it.”

“Very well.” I knew with a heavy heart that this was the way it would have to be.

“Also, that storyline you ditched where Melisandre imbued Stannis with the power of R’hllor and turned him into the Human Torch? Do that, that was awesome.”

Alterno-GRRM again tore open a hole between realities, ready to return to the hellscape that had been his homeworld. “Wait!” I cried. “You do not have to live your life in that terrible place, you can stay here and survive in peace.”

“A tempting offer. Tell me, are there any other changes between our realities?”

After explaining our changed political situation, MechaMartin considered a moment, whilst the tormented shrieks of uncounted legions lost beyond all hope seeped through the gate behind him.
“Well, sometimes the devil you know, eh?” he finally concluded, before stepping through the portal and shutting it behind him.

So there you have it, loyal readers. The Winds of Winter can only be published when doing so would not result in the extinction of humanity, and that time will be goto 50%%%%*$$$&…
Posted by Adam Whitehead at 23:16

Email ThisBlogThis!Share to TwitterShare to FacebookShare to Pinterest
Labels: a song of ice and fire, george r.r. martin, no not really, the winds of winter

I love Werts yearly april fools joke. My personal favorite was the report that Michael Bay was hired to direct/produce a film adaption of Gene Wolf's Book of New Sun series. Sadly I believed the article untill I was mostly done reading it.

That really is a fantastic picture of George

Yeah, I think Martin is going to delay until he perishes or the world does.