The Mirror Empire by Kameron Hurley

The subcontinent of Grania is divided between several nations, including the spiritual, peaceful Dhai and the more militaristic, aggressive kingdom of Dorinah. The murder of the Kai, the spiritual ruler of Dhai, sees her untested and inexperienced younger brother taking charge at a time of turmoil. Internal dissent against his rule is accompanied by assassination attempts...apparently from other Dhai, despite this being a violation of their ideology. Meanwhile, one of Dorinah's best generals is ordered to cull the Dhai slaves living in their kingdom, despite the destructive impact this will have on the economy, and a young girl living in a Dhai monastery discovers that her destiny is far more complex than she first thought. 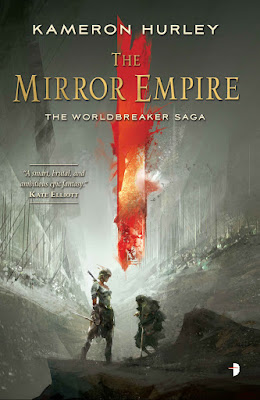 The Mirror Empire is the first novel in The Worldbreaker Saga, Kameron Hurley's follow-up to her splendidly weird science fantasy Bel Dame Apocrypha trilogy. Worldbreaker is wholly fantasy rather than SF and features a lot of standard fantasy tropes, but it mixes these in with fluid gender definitions (some of the inhabitants of Grania are a third sex, or change gender depending on circumstance) and also makes use of the idea of alternate timelines and quantum ideas. Some of the villains of the story are the alternate-universe versions of some of the heroes, which is an interesting idea, especially because there are "good" and "bad" guys on both sides of the mirror and many of the characters are morally nuanced, with good guys doing despicable things and bad guys occasionally showing moral courage.

So far, so standard and so grimdark (if intelligently-realised). Hurley is different in that she seemingly has no interest in making this book easily accessible. In fact, I'd go as far as saying that the first hundred pages or so represent the densest and most-confusing entry to a fantasy series since Steven Erikson's Gardens of the Moon in 1999, which famously puts as many people off reading his Malazan series as it does entice them in to read more. The Mirror Empire opens in media res, features explosive flashbacks without providing context and features an absolute motherlode of invented terminology and nomenclature which will have you flipping to the glossary on a very regular basis. Entering a fantasy world and spending the first hundred pages wading through stodgy exposition is quite a dull experience, so I can see why Hurley took this course. However, this book arguably goes too far in the opposite direction and I can see some readers being alienated by the opening.

Once the book calms down and relents a bit from machine-gunning the reader with under-explained ideas and concepts every five seconds, it radically improves. The characterisation of our four key characters - Roh, Lilia, Zezili and Ahkio - is first-rate and we learn more about their motivations and foibles that makes them more interesting characters than it first appears. Hurley enjoys setting up archetypes - Lilia as the callow low-class girl with unusual powers and a destiny, or Ahkio as the inexperienced young heir thrust into ruling without adequate preparation - and then undercuts them. Lilia does some pretty horrific things in her quest for self-realisation and Ahkio applies his skills from navigating household politics to the greater nation at large and this helps him become a better ruler, as well as being clever enough not to trust the temple officials and to call upon his allies when necessary.

The book unfolds from that point with Hurley's customary vigour and her aggressive, take-no-prisoners approach really makes the book stand out from the fantasy crowd. By the end of the book it has achieved a significant narrative drive that will make you want to press on to the sequel, Empire Ascendant, immediately.

The Mirror Empire (***½) is a robust, entertaining and relentlessly original fantasy, playing with concepts of identity and destiny in a fresh manner. It's also a big that takes no prisoners and almost overwhelms the reader with concepts and invented nomenclature that can be alienating. Stick it out and you are rewarded with one of the better fantasy novels of recent years. The book is available now in the UK and USA.
Posted by Adam Whitehead at 21:33